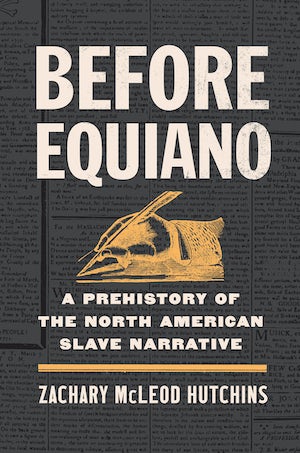 To purchase online via an independent bookstore, visit Bookshop.org
In the antebellum United States, formerly enslaved men and women who told their stories and advocated for abolition helped establish a new genre with widely recognized tropes: the slave narrative. This book investigates how enslaved black Africans conceived of themselves and their stories before the War of American Independence and the genre's development in the nineteenth century. Zachary McLeod Hutchins argues that colonial newspapers were pivotal in shaping popular understandings of both slavery and the black African experience well before the slave narrative's proliferation. Introducing the voices and art of black Africans long excluded from the annals of literary history, Hutchins shows how the earliest life writing by and about enslaved black Africans established them as political agents in an Atlantic world defined by diplomacy, war, and foreign relations. In recovering their stories, Hutchins sheds new light on how black Africans became Black Americans; how the earliest accounts of enslaved life were composed editorially from textual fragments rather than authored by a single hand; and how the public discourse of slavery shifted from the language of just wars and foreign policy to a heritable, race-based system of domestic oppression.

Zachary Hutchins is associate professor of English at Colorado State University and co-editor of The Earliest African American Literatures: A Critical Reader.
For more information about Zachary McLeod Hutchins, visit the Author Page.

"In a work of impressive scope, Hutchins takes on the challenging task of delineating the prehistory of the slave narrative and how slavery was understood in the American colonies, while also helping readers understand the role of newspapers in both the development of and resistance to slavery as an institution."—Karen Weyler, University of North Carolina at Greensboro

"Hutchins offers an in-depth and thought-provoking analysis of some of the earliest examples of slave narratives produced in North America that attends to their formal diversity as well as to the political and cultural contexts of their creation. Hutchins’s work will have great import for the development of a wide variety of scholarly fields and debates."—Nicole N. Aljoe, Northeastern University