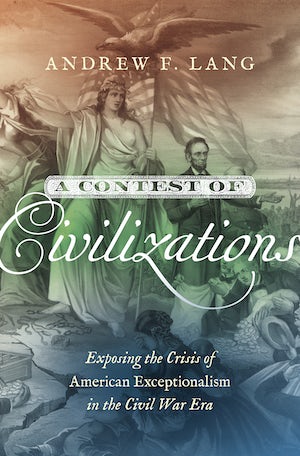 Most mid-nineteenth-century Americans regarded the United States as an exceptional democratic republic that stood apart from a world seemingly riddled with revolutionary turmoil and aristocratic consolidation. Viewing themselves as distinct from and even superior to other societies, Americans considered their nation an unprecedented experiment in political moderation and constitutional democracy. But as abolitionism in England, economic unrest in Europe, and upheaval in the Caribbean and Latin America began to influence domestic affairs, the foundational ideas of national identity also faced new questions. And with the outbreak of civil war, as two rival governments each claimed the mantle of civilized democracy, the United States' claim to unique standing in the community of nations dissolved into crisis. Could the Union chart a distinct course in human affairs when slaveholders, abolitionists, free people of color, and enslaved African Americans all possessed irreconcilable definitions of nationhood?

In this sweeping history of political ideas, Andrew F. Lang reappraises the Civil War era as a crisis of American exceptionalism. Through this lens, Lang shows how the intellectual, political, and social ramifications of the war and its meaning rippled through the decades that followed, not only for the nation's own people but also in the ways the nation sought to redefine its place on the world stage.

Andrew F. Lang is Beverly B. and Gordon W. Gulmon Scholar in the Humanities and associate professor of history at Mississippi State University.
For more information about Andrew F. Lang, visit the Author Page.

"Lang's tour de force is a compelling and essential read. He shows how Americans' self-anointed claim of exceptionalism was, and is, premised on a supposed consensus on liberty's meaning that never was and perhaps will never be. Vital reading for all."—Library Journal, starred review

"Rich with challenging ideas . . . Lang reminds readers that many 19th-century Americans embraced the notion with a fervor that colored their unsuccessful effort to avert war, the war's progression, and its aftermath. That it continues to inform our current day politics, while left unsaid, is nevertheless evident."—Civil War Times

"Lang has produced a thought-provoking and innovative work prodigiously incorporating the formidable volume of scholarship available on the Civil War era."—Journal of the Civil War Era

"A Contest of Civilizations is a major accomplishment, a welcome addition to the superb Littlefield History of the Civil War Era, and a valuable guide to the current state of the field. Future scholars would do well to tease out additional iterations of American exceptionalism, a protean concept that, as Lang demonstrates, has been entangled in some of the nation's greatest achievements and gravest sins."—The North Carolina Historical Review

"A Contest of Civilizations makes a splendid capstone to the Littlefield History of the Civil War series. The book's measured prose will bring conviction to scholars, particularly those who appreciate knowing what people thought and said, with what they did about it trailing after."—The Journal of Southern History

"A Contest of Civilizations is a sweeping, provocative narrative of the Civil War era, one that will prompt readers to think about the causes and consequences of this conflict in new ways. Lang adeptly weaves together different strands of a complex history to create a cohesive comprehensive story that includes diverse viewpoints drawn from a range of sources. This book expands our understanding of the intellectual history of the nineteenth-century United States and complements existing literature about the Civil War from a global perspective. Both scholarly and non-academic readers interested in the history of the Civil War era will enjoy reading this thoughtful, well-researched book."—American Nineteenth Century History