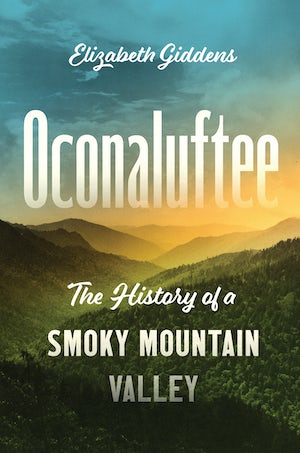 To purchase online via an independent bookstore, visit Bookshop.org
The Oconaluftee Valley, located on the North Carolina side of the Smokies, is home of the Eastern Band of the Cherokee Indians and part of the Great Smoky Mountains National Park (a UNESCO World Heritage Site). This seemingly isolated valley has an epic tale to tell. Always a desirable place to settle, hunt, gather, farm, and live, the valley and its people have played an integral role in some of the greatest dramas of the colonial era, the Trail of Tears, and the Civil War era. The experiences of turn-of-the-twentieth-century industrial logging alongside the national park movement show how land-use trends changed communities and families. Though the valley saw its share of conflict, its residents often lived like neighbors, sharing resources and acting cooperatively for mutual benefit and survival. They demonstrated remarkable resilience in the face of threats to their existence.

Elizabeth Giddens offers a deeply researched and elegantly written account of Oconaluftee and its people from Indigenous settlements to the establishment of the national park by Franklin Delano Roosevelt in 1940. She builds the tale from archives, census records, property records, personal memoirs, and more, showing how national events affected all Oconaluftee's people—Indigenous, Black, and white.

"A deep dive into one valley of the mountain borderlands of the antebellum South, the Civil War, and industrialization. Giddens makes this amazing place come alive by connecting the stories of prosperous and less prosperous people from vastly different walks of life."—Margaret Lynn Brown, Brevard College

"An engaging exploration of how people lived their lives in the face of historical change and how they fought, shared, and endured. In the struggles of valley residents, readers may see their own struggles and be reminded just how far the stereotypes of Appalachia differ from the realities and complexities lived out in the Oconaluftee Valley."—Tom Lee, East Tennessee State University