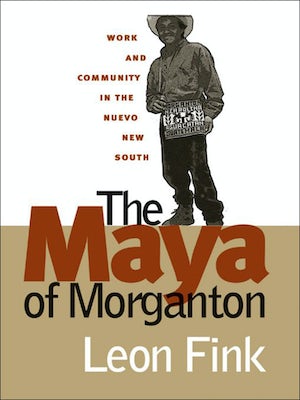 The arrival of several hundred Guatemalan-born workers in a Morganton, North Carolina, poultry plant sets the stage for this dramatic story of human struggle in an age of globalization. When laborers' concerns about safety and fairness spark a strike and, ultimately, a unionizing campaign at Case Farms, the resulting decade-long standoff pits a recalcitrant New South employer against an unlikely coalition of antagonists. Mayan refugees from war-torn Guatemala, Mexican workers, and a diverse group of local allies join forces with the Laborers union. The ensuing clash becomes a testing ground for "new labor" workplace and legal strategies. In the process, the nation's fastest-growing immigrant region encounters a new struggle for social justice.

Using scores of interviews, Leon Fink gives voice to a remarkably resilient people. He shows that, paradoxically, what sustains these global travelers are the ties of local community. Whether one is finding a job, going to church, joining a soccer team, or building a union, kin and linguistic connections to the place of one's birth prove crucial in negotiating today's global marketplace.

A story set at the intersection of globalization and community, two words not often linked, The Maya of Morganton addresses fundamental questions about the changing face of labor in the United States.

Leon Fink is professor of history and director of the Work, Race, and Gender in the Urban World graduate program at the University of Illinois at Chicago. His most recent book is Progressive Intellectuals and the Dilemmas of Democratic Commitment.
For more information about Leon Fink, visit the Author Page.

"[The Maya of Morganton] is a tale of no small amount of heartbreak. . . . Yet this is also a tale of immense bravery and solidarity against incredible odds and forces. . . . Fink has an informed heart, which prompts him to say quite poignantly what seems just and humane."--Chicago Tribune

"[Fink] considers the Maya's lives and reception in Morganton, how varied past experiences of war and deprivation in Guatemala shaped their decisions on whether to take labor action, and how churches, a burial society, and other immigrant community institutions reinforced their communal resolve."--Chronicle of Higher Education

"Fink brings this heroic yet ultimately tragic story to life with vivid portraits of in-plant leaders, rank-and-file workers who waged (and sometimes gave up) the fight, their helpers in local churches and community groups, and various outside union organizers and lawyers, who joined the fray along the way."--New Labor Forum

"Leon Fink's outstanding new book on the struggles of Mayan immigrants at the Morganton Case Farms plant in the 1990s is an important contribution towards debates over immigration, globalization, ethnic identity formation, Indigenous studies, and labor history. . . . [The Maya of Morganton: Work and Community in the Nuevo New South] is a book full of astonishing insights on the decline of freedom."--Journal of American Ethnic History

"This highly nuanced study puts faces and names on a working class of economic and political refugees that reflects the demographic transformation of the United States labor force in an era of extensive globalization."--Journal of American History

"A highly sophisticated analysis of migration, community, and the multiple consequences of globalization. . . . For a powerful example of how and why the South has been changing, read this book."--North Carolina Historical Review