The Publishing Process: A Guide for Authors

UNC Press in the News

The University of North Carolina Press advances the research, teaching, and public service missions of a great public university by publishing excellent work from leading scholars, writers, and intellectuals and by presenting that work to both academic audiences and general readers.

To be recognized as the nation’s premier public university press while remaining a progressive force in the state and region.

From Our Original Charter* 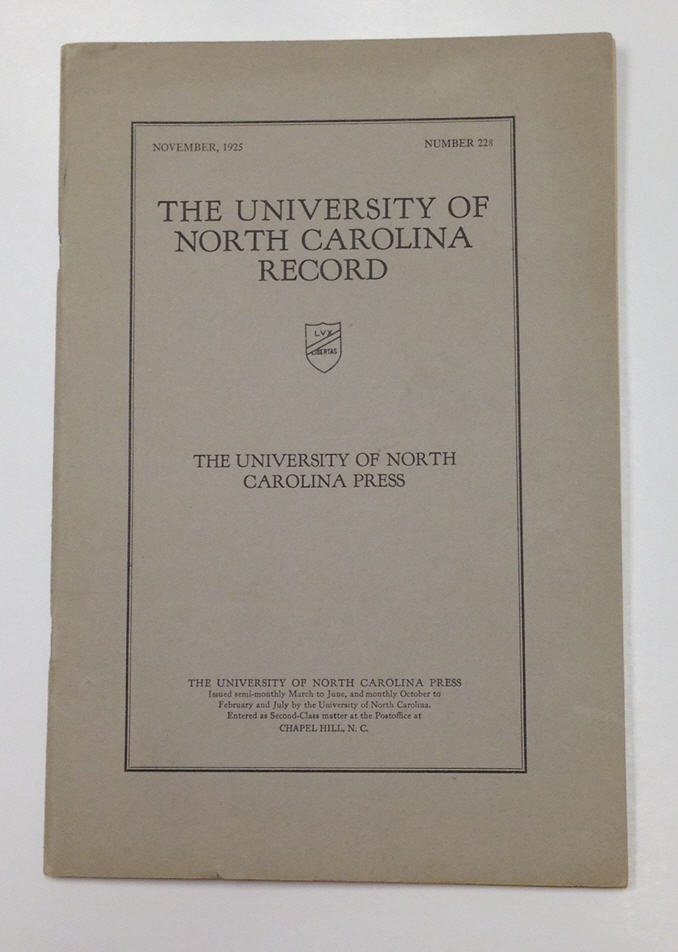 “To publish periodicals devoted to the advancement of learning and produced at the University of North Carolina by or under the direction of the faculty of that University. To publish, so far as may be agreed between the corporation and authorities of the University of North Carolina, catalogs, bulletins, and other documents pertaining to that University or to any department thereof. To promote generally, by publishing deserving books, the advancement of the arts and sciences, and the development of literature. . . . The stimulus to the intellectual life of the university and of the entire South is, in itself, sufficient argument for undertaking the project.”

The University of North Carolina Press, a nonprofit publisher of both scholarly and general-interest books and journals, operates simultaneously in a business environment and in the world of scholarship and ideas. The Press advances the University’s triple mission of teaching, research, and public service by publishing first-rate books and journals for students, scholars, and general readers. The Press has earned a distinguished reputation by publishing excellent work from the nation’s leading scholars, writers, and intellectuals and by presenting that work effectively to wide-ranging audiences.

Established in 1922, UNC Press was the first university press in the South and one of the first in the nation. Our regional publishing program—aimed at general readers and offering engaging, authoritative work on all aspects of the region’s history and culture, its natural and built environment, its music, food, literature, geography, plant and animal life—has been widely adopted in other parts of the country. Over the years, Press books have won hundreds of prestigious awards including the Pulitzer Prize and the National Book Award and those of many national scholarly societies. Today, the imprint of UNC Press is recognized worldwide as a mark of publishing excellence—both for what we publish and for how we publish. Because of our respected authors who rely on the Press to connect readers with important ideas, the name of the University is carried on Press books and journals across the country and around the globe, in both print and digital formats.

For almost one hundred years, the University of North Carolina Press has earned national and international recognition for high quality books and the thoughtful way they are published. A fundamental commitment to publishing excellence defines UNC Press, made possible by our community of publishing professionals, authors, and advisors. We are also strengthened by support from the state of North Carolina and the generous contributions of individual and institutional donors who created our endowment.

In 1922, on the campus of the nation’s oldest state university, thirteen distinguished educators and civic leaders met to charter a publishing house. Their creation, the University of North Carolina Press, was the first university press in the South and one of the first in the nation. Today, the Press is an affiliate of the 16-campus UNC system, and its purpose remains to advance scholarship and to serve the people of the state and the region.

Our publishing perspective is at once local, national, and international, extending from our office in Chapel Hill across North Carolina and around the globe. We proudly publish the best work on a variety of subjects by scholars and writers from all across the nation.

From the start, UNC Press took a different, pioneering approach for a university press, not only focusing on the publication of scholarly works but also creating one of the earliest and strongest regional publishing programs in the country. UNC Press books on varied topics have helped shape a cultural legacy and preserve it for future .

The Press distinguished itself early on by refusing to shy away from the controversial issues of the day, adopting the principle that our books should not merely observe but should seek to understand, to explain, and thereby to improve our world. We publish books that challenge personal and public thinking and books that enlighten and delight us. The idea was—and is—to publish books that have an impact and make a difference.

For example, the UNC Press was the first scholarly publisher to develop an ongoing program of books by and about African Americans, beginning in the late 1920s. By 1950, nearly 100 such volumes had appeared under its imprint, including famed historian John Hope Franklin’s first book, The Free Negro in North Carolina, 1790–1860, published in 1943. In the 1970s, the UNC Press was again in the vanguard, recognizing the emerging interdisciplinary field of women’s studies, taking an early lead in publishing feminist literary and historical works of distinction. Both African American studies and gender and women’s studies remain cornerstones of our publishing program today. And more recently, UNC Press’s publishing program has helped foster the growing significance of Native American and Indigenous studies, a field of national and global interest that has flourished over the last decade with the establishment of new scholarly associations and academic departments.

Scholars and archivists have lauded our multi-volume documentary editions—such as The Papers of John Marshall, The Papers of General Nathanael Greene, The Black Abolitionist Papers, and The Complete Works of Captain John Smith. Acclaimed reference works such as the Encyclopedia of Southern Culture broke new ground and led to the publication of other city, state, and regional encyclopedias; and books like North Carolina Architecture and the Encyclopedia of North Carolina have set a standard for regional reference works that other publishers now follow.

If the measure of a publishing house is the quality of its books, then the UNC Press holds an enviable record. Over the past nine-plus decades, the Press has received virtually every important book award, including the National Book Award, the Pulitzer Prize, the Bancroft Prize, and the top prizes given by leading scholarly societies and respected organizations like the American Bar Association; the American Institute of Architects; the American Society of Composers, Authors, and Publishers; and the Royal Society of Canada. Over the years, UNC Press titles have won literally hundreds of major prizes in American and world history, religious studies, Latin American and Caribbean studies, American studies, gender and women’s studies, literary studies, music, architecture, human rights, and legal studies.

The Press partners with a variety of other leading institutions and public groups. From our long-standing relationships with the Omohundro Institute of Early American History and Culture and the Center for Documentary Studies at Duke University, to more recent partnerships with the Clements Center for Southwest Studies at Southern Methodist University and the North Carolina Office of Archives and History, the Press seeks to support other not-for-profit centers and institutions reach their readers in the most efficient and cost-effective ways possible.

When the Press was founded, university presses published work strictly for scholars and by scholars, primarily those from the home faculty. Today, Press authors come from all across the nation and around the world. The roster of our authors is long and impressive, including historians such as John Hope Franklin, Gerda Lerner, Gordon Wood, Mary Kelley, Jacquelyn Dowd Hall, Nell Irvin Painter, Glenda Gilmore, Timothy Tyson, Gary W. Gallagher, Tiya Miles, Laurent Dubois, and Louis A. Pérez Jr.; scholars of American and world religions including Carl W. Ernst and Catherine Brekus; lauded literary writers and critics such as Elizabeth Lawrence, Cleanth Brooks, Phillis Wheatley, Thomas Wolfe, Paul Green, and Wilma Dykeman; prominent scholars of the American South from Howard Odum to William Ferris; and local celebrities such as David Stick, Bill Neal, Mildred (Mama Dip) Council, and Bland Simpson. Thanks to our respected authors and their good work, the name of the Press, and of the University of North Carolina, is regularly carried across the country and around the globe.

Looking to the future, innovation continues to flourish at the Press—both in identifying emerging areas of scholarship and in harnessing technology to better disseminate and provide access to our publications. Through its wholly owned not-for-profit subsidiary, Longleaf Services, the Press is providing much-needed economies of scale in back-end services for a growing group of university presses. The newly formed Office of Scholarly Publishing Services is expanding our role within the 16-campus UNC System to support publishing originating at our diverse universities.

But no matter how timely the subject or how up-to-date the method of distribution, the highest standards in traditional book publishing—from selection to presentation—are always honored at UNC Press. An important part of our commitment to publishing excellence involves the craft of publishing, where the Press has earned widespread recognition for thoughtful editorial work and numerous awards for sophisticated typography and superb book design.

As a result, UNC Press is a benchmark against which many other university presses are measured.