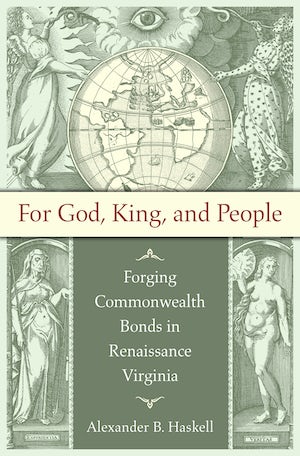 By recovering a largely forgotten English Renaissance mindset that regarded sovereignty and Providence as being fundamentally entwined, Alexander Haskell reconnects concepts historians had before treated as separate categories and argues that the first English planters in Virginia operated within a deeply providential age rather than an era of early modern entrepreneurialism. These men did not merely settle Virginia; they and their London-based sponsors saw this first successful English venture in America as an exercise in divinely inspired and approved commonwealth creation. When the realities of Virginia complicated this humanist ideal, growing disillusionment and contention marked debates over the colony.

Rather than just "selling" colonization to the realm, proponents instead needed to overcome profound and recurring doubts about whether God wanted English rule to cross the Atlantic and the process by which it was to happen. By contextualizing these debates within a late Renaissance phase in England, Haskell links increasing religious skepticism to the rise of decidedly secular conceptions of state power. Haskell offers a radical revision of accepted narratives of early modern state formation, locating it as an outcome, rather than as an antecedent, of colonial endeavor.

“Its vast explorations into the providentialist and political underpinnings of Virginia’s founding are impressive. . . . It is a must-read for professors and graduate students focused on English colonization.”--Reading Religion

"Can be read profitably by anyone interested in the early English Atlantic and in early modern ideologies of empire."--Journal of Church and State

“Haskell has written an intellectual history that is deeply grounded in historical events.”--The Journal of Southern History

“Haskell’s history of Virginia articulates in convincing fashion that the colony was not merely a physical space or the seedbed for the mercantile empire that would grow to fruition in later decades.”--William and Mary Quarterly

“An intriguing analysis of a variety of texts and debates around early English engagement in the colonisation of the Americas.”--English Historical Review