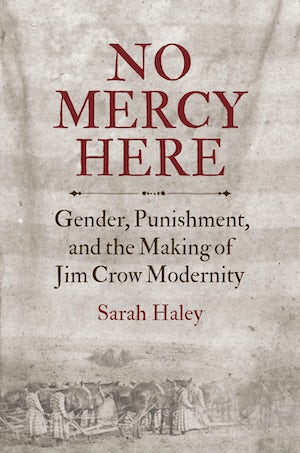 In the late nineteenth and early twentieth centuries imprisoned black women faced wrenching forms of gendered racial terror and heinous structures of economic exploitation. Subjugated as convict laborers and forced to serve additional time as domestic workers before they were allowed their freedom, black women faced a pitiless system of violence, terror, and debasement. Drawing upon black feminist criticism and a diverse array of archival materials, Sarah Haley uncovers imprisoned women’s brutalization in local, county, and state convict labor systems, while also illuminating the prisoners’ acts of resistance and sabotage, challenging ideologies of racial capitalism and patriarchy and offering alternative conceptions of social and political life.

A landmark history of black women’s imprisonment in the South, this book recovers stories of the captivity and punishment of black women to demonstrate how the system of incarceration was crucial to organizing the logics of gender and race, and constructing Jim Crow modernity.

Sarah Haley is assistant professor of gender studies and African American studies at the University of California, Los Angeles.
For more information about Sarah Haley, visit the Author Page.

“Haley offers an important analysis of a particular group of women: prisoners in Georgia from 1868 to the early 20th century. Astutely mining archival records, the author offers no soft edge to chronicle the ‘unrepresentable’ violence against incarcerate women, especially those of color. Highly recommended.”--Choice

“Explores the fate of black women convicted in the southern United States and Georgia in particular. . . . Reconstructs the course of dozens of women.”--Champ Penal

“No Mercy Here is the most important contribution to U.S. labor history to appear in the last fifteen years. With theoretical sophistication, breathtaking archival depth, and historical imagination, Sarah Haley tells a compelling story of how the criminal punishment system, through which the state policed and exploited black working-class women, laid the foundation of Jim Crow modernity. But this is also a story of resistance—to captivity, to capital, to the carceral state. Poets, bards, philosophers, saboteurs, these women acted on dreams of revenge, retaliation, and flight; laughed and loved in the face of terror; and built an architecture of opposition that confounded the state.”--Robin D. G. Kelley, author of Thelonious Monk: The Life and Times of an American Original

"Sarah Haley’s compelling study of black women’s quotidian encounters with post-slavery systems of punishment generates original insights regarding the role of gendered carcerality in the persistence of racial violence today. No Mercy Here also reveals a long line of resistance—an unacknowledged dimension of the Black Radical Tradition—from minor disruptions and acts of sabotage to poetic ruptures in the expressive culture of the blues."--Angela Y. Davis, Distinguished Professor Emerita, University of California, Santa Cruz

“No Mercy Here is a brilliant account of black women and imprisonment. Haley’s interdisciplinary breadth has enabled her to produce a history of the carceral system that defines the constituents of Jim Crow modernity, detailing the primacy of gender and sexual violence as techniques of racial terror, capitalist production, and historical dispossession. In its painstaking explication of the emergence of a modern racial order in which black life remains in peril, this groundbreaking text is certain to transform our understanding of the afterlife of slavery.”--Saidiya Hartman, author of Lose Your Mother: A Journey Along the Atlantic Slave Route