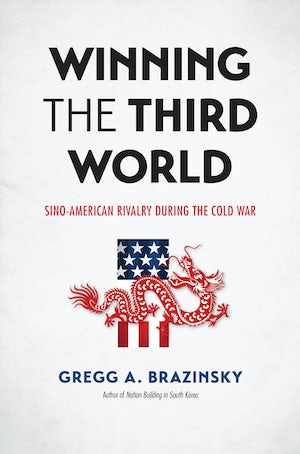 Winning the Third World examines afresh the intense and enduring rivalry between the United States and China during the Cold War. Gregg A. Brazinsky shows how both nations fought vigorously to establish their influence in newly independent African and Asian countries. By playing a leadership role in Asia and Africa, China hoped to regain its status in world affairs, but Americans feared that China’s history as a nonwhite, anticolonial nation would make it an even more dangerous threat in the postcolonial world than the Soviet Union. Drawing on a broad array of new archival materials from China and the United States, Brazinsky demonstrates that disrupting China’s efforts to elevate its stature became an important motive behind Washington’s use of both hard and soft power in the “Global South.”

Presenting a detailed narrative of the diplomatic, economic, and cultural competition between Beijing and Washington, Brazinsky offers an important new window for understanding the impact of the Cold War on the Third World. With China’s growing involvement in Asia and Africa in the twenty-first century, this impressive new work of international history has an undeniable relevance to contemporary world affairs and policy making.

“Essential reading for anyone interested in the future of U.S.-Chinese relations.”--Foreign Affairs

“Sheds new light on the Cold War as a global contest for multiple players to win hearts and minds, and above all, to improve their international status.”--Journal of American-East Asian Relations

“Commendably ambitious. . . . A useful and eye-opening account of the multifaceted Sino-American rivalry in Asia, Africa, and the Middle East.”--American Historical Review

“Brazinsky has written a fresh and, indeed, pioneering book on the hot subject of Sino-American relations in the Cold War by concentrating on the previously little-explored area of the two countries’ competition in the Third World. This is first-rate scholarship.”--Chen Jian, Cornell University

“By exploring China’s foreign policy toward the Afro-Asian world during the Cold War, Brazinsky has moved the literature on Sino-American relations in a new direction. Scholars have noted the Maoist emphasis on the “intermediate zone,” but few have taken it seriously by studying how it influenced Chinese policy.”--Lorenz Lüthi, McGill University