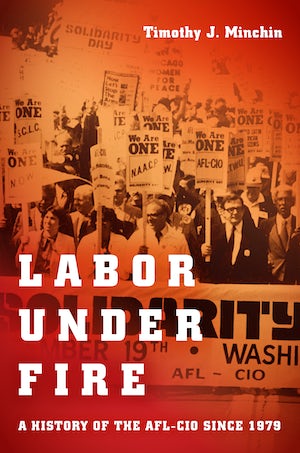 From the Reagan years to the present, the labor movement has faced a profoundly hostile climate. As America’s largest labor federation, the AFL-CIO was forced to reckon with severe political and economic headwinds. Yet the AFL-CIO survived, consistently fighting for programs that benefited millions of Americans, including social security, unemployment insurance, the minimum wage, and universal health care. With a membership of more than 13 million, it was also able to launch the largest labor march in American history--1981’s Solidarity Day--and to play an important role in politics.

In a history that spans from 1979 to the present, Timothy J. Minchin tells a sweeping, national story of how the AFL-CIO sustained itself and remained a significant voice in spite of its powerful enemies and internal constraints. Full of details, characters, and never-before-told stories drawn from unexamined, restricted, and untapped archives, as well as interviews with crucial figures involved with the organization, this book tells the definitive history of the modern AFL-CIO.