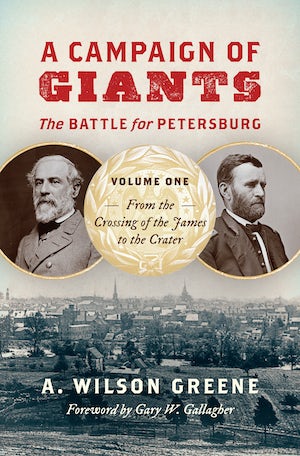 Grinding, bloody, and ultimately decisive, the Petersburg Campaign was the Civil War's longest and among its most complex. Ulysses S. Grant and Robert E. Lee squared off for more than nine months in their struggle for Petersburg, the key to the Confederate capital at Richmond. Featuring some of the war's most notorious battles, the campaign played out against a backdrop of political drama and crucial fighting elsewhere, with massive costs for soldiers and civilians alike. After failing to bull his way into Petersburg, Grant concentrated on isolating the city from its communications with the rest of the surviving Confederacy, stretching Lee's defenses to the breaking point. When Lee's desperate breakout attempt failed in March 1865, Grant launched his final offensives that forced the Confederates to abandon the city on April 2, 1865. A week later, Lee surrendered at Appomattox Court House.

Here A. Wilson Greene opens his sweeping new three-volume history of the Petersburg Campaign, taking readers from Grant's crossing of the James in mid-June 1864 to the fateful Battle of the Crater on July 30. Full of fresh insights drawn from military, political, and social history, A Campaign of Giants is destined to be the definitive account of the campaign. With new perspectives on operational and tactical choices by commanders, the experiences of common soldiers and civilians, and the significant role of the United States Colored Troops in the fighting, this book offers essential reading for all those interested in the history of the Civil War.

A. Wilson Greene is the former president of the Pamplin Historical Park and the National Museum of the Civil War Soldier and author of The Final Battles of the Petersburg Campaign.
For more information about A. Wilson Greene, visit the Author Page.

Gary W. Gallagher is John L. Nau III Professor of History at the University of Virginia and author or editor of numerous books, including Lee and His Army in Confederate History and The Shenandoah Valley Campaign of 1864.
For more information about Gary W. Gallagher, visit the Author Page.

“A Campaign of Giants stands among the most authoritative and engagingly presented Civil War studies ever written.”--Wall Street Journal

“Pairing the expertly written text with thirty-four maps and other illustrations, this book is a must have not only for students of Petersburg, but for anyone remotely interested in the military campaigns of the American Civil War.”--TOCWOC A Civil War Blog

“What makes A Campaign of Giants so riveting is Greene’s willingness to challenge historical conventions and address controversies that have intrigued scholars and readers for generations.”--ARMY Book Review

“Greene’s writing is crisp and clear, and the lucid descriptions of the often-confusing engagements help the reader follow the battle with a bird’s-eye clarity. . . . An excellent resource for scholars and enthusiasts alike.”--Vermont History

“In its capacious approach, [A Campaign of Giants] rebuts charges of romanticization—it is hard to come away Greene’s treatment of the grisly combat in the Crater as someone overly fond of war—but at its most fundamental level, Greene analyzes the campaign’s participants as human individuals who fought, fled, failed, suffered, and sometimes triumphed.”--Journal of the Civil War Era