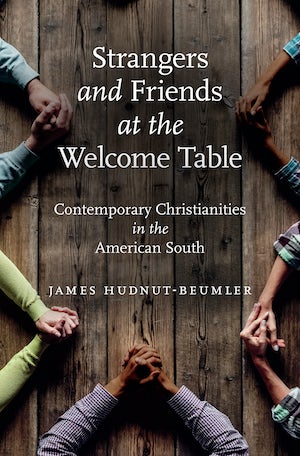 In this fresh and fascinating chronicle of Christianity in the contemporary South, historian and minister James Hudnut-Beumler draws on extensive interviews and his own personal journeys throughout the region over the past decade to present a comprehensive portrait of the South’s long-dominant religion. Hudnut-Beumler traveled to both rural and urban communities, listening to the faithful talk about their lives and beliefs. What he heard pushes hard against prevailing notions of southern Christianity as an evangelical Protestant monolith so predominant as to be unremarkable.

True, outside of a few spots, no non-Christian group forms more than six-tenths of one percent of a state’s population in what Hudnut-Beumler calls the Now South. Drilling deeper, however, he discovers an unexpected, blossoming diversity in theology, practice, and outlook among southern Christians. He finds, alongside traditional Baptists, black and white, growing numbers of Christians exemplifying changes that no one could have predicted even just forty years ago, from congregations of LGBT-supportive evangelicals and Spanish-language church services to a Christian homeschooling movement so robust in some places that it may rival public education in terms of acceptance. He also finds sharp struggles and political divisions among those trying to reconcile such Christian values as morality and forgiveness—the aftermath of the mass shooting at Charleston’s Emanuel A.M.E. Church in 2015 forming just one example. This book makes clear that understanding the twenty-first-century South means recognizing many kinds of southern Christianities.

James Hudnut-Beumler is the Anne Potter Wilson Distinguished Professor of American religious history at Vanderbilt University Divinity School and the author of several books, including In Pursuit of the Almighty’s Dollar.
For more information about James Hudnut-Beumler, visit the Author Page.

"A book that's part pilgrimage, part history lesson, and part celebration of the many versions of Christianity in the South. [Hudnut-Beumler] writes with grace about almost everyone he meets. . . . Still, [he] doesn't shy away from the deep divides and sins of Southern Christians."--Bob Smietana, Christianity Today

“Will serve as a good reference for those interested in further exploring or conducting research on the recent history of Christianity in the South.”--Nova Religio

“Though it has long been common knowledge that the South has remained the most religious section of the United States, few realize just how diverse are the expressions of its faith. James Hudnut-Beumler . . . now dispels long held stereotypes, drawing upon a decade of interviews, field trips, and research in a host of primary and secondary sources. . . . An engaging work.”--Anglican and Episcopal History

“Highlighting the everyday voices of people within and outside of churches in the South, James Hudnut-Beumler provides a new look at what ‘southern religion’ means in the twenty-first century. What he finds out about the complicated legacies of southern religion—hospitable, in spite of a painful and difficult history regarding race, gender, and sexuality—will be of great interest to southerners and nonsoutherners alike.”—Anthea D. Butler, author of Women in the Church of God in Christ

“This rich, warm book wears its learning lightly, telling fascinating stories of diversity in the expression of contemporary Christianities in the South. The diversity here is very real—snake-handlers, Civil War reenactors, post-Katrina victims, megachurch attendees, Catholics, homeschoolers, LGBT-friendly congregations, creationists, and political figures ranging from right to left. While Christianity continues to dominate the culture of the southern states, Christianities represent many different kinds of people.”—Paul Harvey, co-author of The Color of Christ

“In a lively portrayal of southern Christian communities’ witness to their faith, Hudnut-Beumler dispels long-standing stereotypes about this multifaceted region and offers rich insights about its history as well as contemporary realities. Natives will discover new dimensions of the place they call home, while newcomers to the South and those outside of it will encounter new revelations and quite a few surprises.”—Jan Love, dean of Candler School of Theology, Emory University