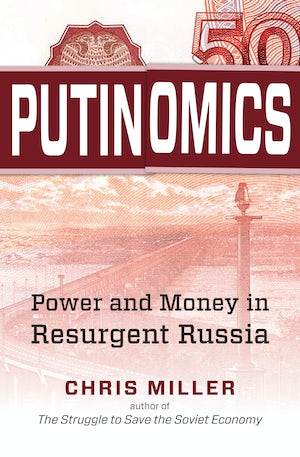 When Vladimir Putin first took power in 1999, he was a little-known figure ruling a country that was reeling from a decade and a half of crisis. In the years since, he has reestablished Russia as a great power. How did he do it? What principles have guided Putin’s economic policies? What patterns can be discerned? In this new analysis of Putin’s Russia, Chris Miller examines its economic policy and the tools Russia’s elite have used to achieve its goals. Miller argues that despite Russia’s corruption, cronyism, and overdependence on oil as an economic driver, Putin’s economic strategy has been surprisingly successful.

Explaining the economic policies that underwrote Putin’s two-decades-long rule, Miller shows how, at every juncture, Putinomics has served Putin’s needs by guaranteeing economic stability and supporting his accumulation of power. Even in the face of Western financial sanctions and low oil prices, Putin has never been more relevant on the world stage.

Chris Miller is assistant professor of international history in the Fletcher School of Law and Diplomacy at Tufts University.
For more information about Chris Miller, visit the Author Page.