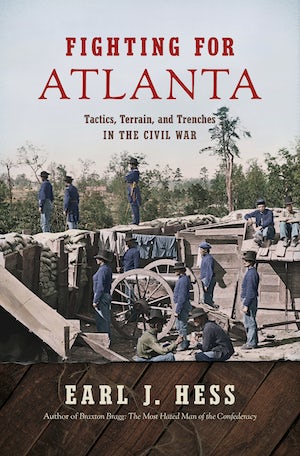 As William T. Sherman's Union troops began their campaign for Atlanta in the spring of 1864, they encountered Confederate forces employing field fortifications located to take advantage of rugged terrain. While the Confederates consistently acted on the defensive, digging eighteen lines of earthworks from May to September, the Federals used fieldworks both defensively and offensively. With 160,000 troops engaged on both sides and hundreds of miles of trenches dug, fortifications became a defining factor in the Atlanta campaign battles. These engagements took place on topography ranging from Appalachian foothills to the clay fields of Georgia's piedmont.

Leading military historian Earl J. Hess examines how commanders adapted their operations to the physical environment, how the environment in turn affected their movements, and how Civil War armies altered the terrain through the science of field fortification. He also illuminates the impact of fighting and living in ditches for four months on the everyday lives of both Union and Confederate soldiers. The Atlanta campaign represents one of the best examples of a prolonged Union invasion deep into southern territory, and, as Hess reveals, it marked another important transition in the conduct of war from open field battles to fighting from improvised field fortifications.

Earl J. Hess is Stewart W. McClelland Chair in History at Lincoln Memorial University. His most recent book is The Battle of Peach Tree Creek.
For more information about Earl J. Hess, visit the Author Page.