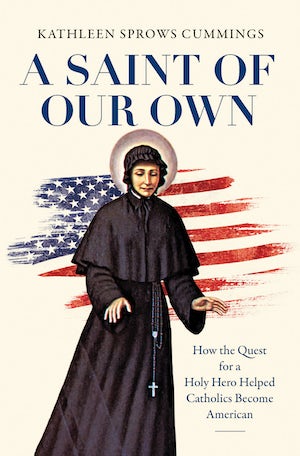 What drove U.S. Catholics in their arduous quest, full of twists and turns over more than a century, to win an American saint? The absence of American names in the canon of the saints had left many of the faithful feeling spiritually unmoored. But while canonization may be fundamentally about holiness, it is never only about holiness, reveals Kathleen Sprows Cummings in this panoramic, passionate chronicle of American sanctity. Catholics had another reason for petitioning the Vatican to acknowledge an American holy hero.

A home-grown saint would serve as a mediator between heaven and earth, yes, but also between Catholicism and American culture. Throughout much of U.S. history, the making of a saint was also about the ways in which the members of a minority religious group defined, defended, and celebrated their identities as Americans. Their fascinatingly diverse causes for canonization—from Kateri Tekakwitha and Elizabeth Ann Seton to many others that are failed, forgotten, or still under way—represented evolving national values as Catholics made themselves at home. Cummings’s vision of American sanctity shows just how much Catholics had at stake in cultivating devotion to men and women perched at the nexus of holiness and American history—until they finally felt little need to prove that they belonged.

A nationally recognized expert on Pope Francis and Catholicism, Kathleen Sprows Cummings, author of New Women of the Old Faith, is professor of American studies and history and William W. and Anna Jean Cushwa Director of the Cushwa Center for the Study of American Catholicism at the University of Notre Dame.
For more information about Kathleen Sprows Cummings, visit the Author Page.