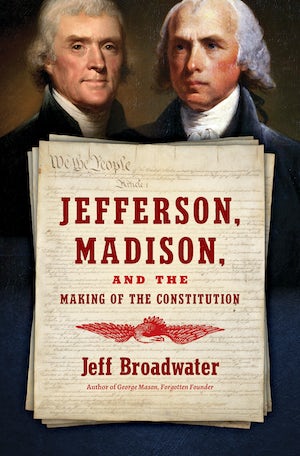 In this book, Jeff Broadwater explores the evolution of the constitutional thought of these two seminal American figures, from the beginning of the American Revolution through the adoption of the Bill of Rights. In explaining how the two political compatriots could have produced such seemingly dissimilar documents but then come to a common constitutional ground, Broadwater reveals how their collaboration--and their disagreements--influenced the full range of constitutional questions during this early period of the American republic.

Historian Jeff Broadwater is the author of several previous books, including James Madison: A Son of Virginia and a Founder of the Nation.
For more information about Jeff Broadwater, visit the Author Page.

“Although there are other scholarly works that touch on the same subject, Broadwater has written in a style that will appeal to a wider audience. . . . [Jefferson, Madison, and the Making of the Constitution] belongs in the libraries of institutions of higher education and in major public libraries.”--Choice

"Innovative and engrossing, this book illuminates the friendship between Jefferson and Madison and then uses that connection to probe thoughtfully the relationship between the Declaration of Independence and the Constitution."--Todd Estes, Oakland University