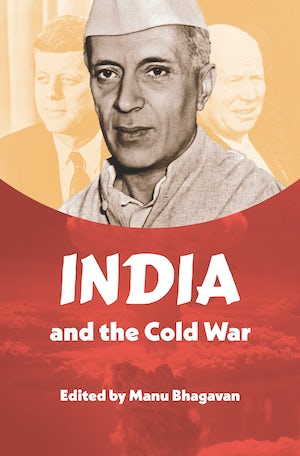 Not for Sale in India, Pakistan, and South Asia, with the exception of Afghanistan

This collection of essays inverts the way we see the Cold War by looking at the conflict from the perspective of the so-called developing world, rather than of the superpowers, through the birth and first decades of India’s life as a postcolonial nation. Contributors draw on a wide array of new material, from recently opened archival sources to literature and film, and meld approaches from diplomatic history to development studies to explain the choices India made and to frame decisions by its policy makers. Together, the essays demonstrate how India became a powerful symbol of decolonization and an advocate of non-alignment, disarmament, and global governance as it stood between the United States and the Soviet Union, actively fostering dialogue and attempting to forge friendships without entering into formal alliances. Sweeping in its scope yet nuanced in its analysis, this is the authoritative account of India and the Cold War.

Manu Bhagavan is professor of history and human rights at Hunter College and the Graduate Center–The City University of New York.
For more information about Manu Bhagavan, visit the Author Page.

“Bhagavan (CUNY) brings together a wide variety of approaches—from philosophy and domestic and international politics, to poetry and film—in an attempt to demonstrate that India was neither naive nor passive during the Cold War, but rather actively sought to shape its environment and future. . . . readers are reminded that India has always forged its own path in foreign policy and has never fallen under the sway of any foreign power, regardless of which party governs.”--CHOICE

“This book presents a compelling and fascinating narrative of diplomacy and power politics against the backdrop of the early and middle Cold War years, of peacemaking and economic development, and of the cultural terrain that transgressed political boundaries. The formulation and deployment of India’s foreign policy options against the pull and push of globally competing ideological forces are delineated in detail. The grim realities of international power politics confronting a new Republic facing formidable challenges of territorial consolidation and economic underdevelopment are vividly recalled. The play of ‘virtuous purpose’ and pragmatic national interest in the theater of conflict, disarmament, and competing models of economic development is probed in depth. This is a book that enlightens and explains. It is a gripping story of independent India’s historic coming into the modern world.”--Nirupama Rao, former foreign secretary and ambassador of India to China and to the United States

"Given India's rapidly growing importance on the international stage, there is obvious need to understand the historical origins of its worldview, the goals that have driven its actions, and its sense of constraints and opportunities. This work fulfills that need, presented accessibly and with close attention to craft and detail."--Sunil Khilnani, King’s India Institute, London

"Featuring well-established scholars, as well as a range of younger voices who are making a significant mark, this is a path-breaking volume that brings together essays on global history, geopolitics, political economy, and culture."--Kanti Bajpai, National University of Singapore

"This collection delivers even more than the title suggests. It gathers together a new generation of scholars from around the globe to explore India’s place in the Cold War world, from poetry to summitry and from the optimism of the 1940s to the Emergency of the 1970s--and beyond. Full of insight and information, it is essential reading for anyone interested in Indian foreign relations."--David Engerman, author of The Price of Aid: The Economic Cold War in India