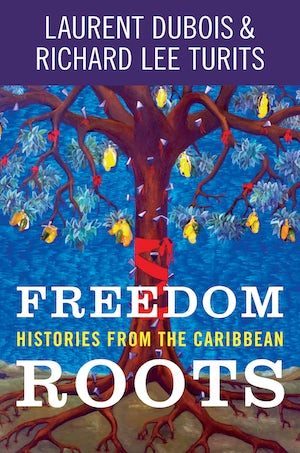 "To tell the history of the Caribbean is to tell the history of the world," write Laurent Dubois and Richard Lee Turits. In this powerful and expansive story of the vast archipelago, Dubois and Turits chronicle how the Caribbean has been at the heart of modern contests between slavery and freedom, racism and equality, and empire and independence. From the emergence of racial slavery and European colonialism in the early sixteenth century to U.S. annexations and military occupations in the twentieth, systems of exploitation and imperial control have haunted the region. Yet the Caribbean is also where empires have been overthrown, slavery was first defeated, and the most dramatic revolutions triumphed. Caribbean peoples have never stopped imagining and pursuing new forms of liberty.

Dubois and Turits reveal how the region’s most vital transformations have been ignited in the conflicts over competing visions of land. While the powerful sought a Caribbean awash in plantations for the benefit of the few, countless others anchored their quest for freedom in small-farming and counter-plantation economies, at times succeeding against all odds. Caribbean realities to this day are rooted in this long and illuminating history of struggle.

Laurent Dubois, author of Haiti: The Aftershocks of History and A Colony of Citizens, among other books, is professor of history and romance studies at Duke University.
For more information about Laurent Dubois, visit the Author Page.

Richard Lee Turits, author of Foundations of Despotism, is associate professor of history, Africana studies, and Latin American studies at The College of William & Mary.

“Freedom Roots narrates the history of the Caribbean islands from the late 15th century until the present from a ‘counter-plantation perspective.’ The main thread running throughout the narrative is land—specifically the tension between elite desires to extract wealth from it and popular efforts to derive autonomy from it. . . . This volume's accessible narrative quality and critical perspectives make it a great textbook for any Caribbean history course.”--CHOICE

“This varied, wide-angle history, one that rolls on from first contact through plantations, slavery, peasants, and revolutions, centers on how land was used by the exploiting empires and the ways different communities pushed back. The focus here is on the stories of populations who have fought, with more or less success, to imagine alternatives to imperial rule.”--Brown Alumni Magazine

“Laurent Dubois’ and Richard Lee Turits’ lively narrative. . . . Tells a straightforward and easy-to follow history of the Caribbean that doesn’t sacrifice theoretical sophistication. . . . Freedom Roots’ ability to distill the complex history of the Caribbean into one narrative makes it an excellent teaching tool and an invaluable resource for scholars of the region. It fulfills its own call to imagine a different (and better) Caribbean.”--Journal of Social History

"Powerfully argued and engagingly written. . . . Freedom Roots offers a well-written, always interesting, and erudite account of the topics it takes up, especially the troubled histories of Cuba, Haiti, and the Dominican Republic in the last century."--New West Indian Guide

"A magisterial, wide-ranging work that tells a global history of the Caribbean—among the most densely colonized regions of the world—in a way that centers the perspectives of the generations of people who have struggled to envision and create alternatives to imperial rule and its legacies. Laurent Dubois and Richard Lee Turits brilliantly shift our default focus from Caribbean plantation society to Caribbean counter-plantation society and the rich cultural and political worlds it has generated over many centuries."—Ada Ferrer, author of Freedom’s Mirror

"Ambitious, powerfully argued, and elegantly written, Freedom Roots thrusts the Caribbean into the center of historical debates and political controversies, illuminating the understanding of slavery, race relations, political insurgencies, economic modernization, and the building of nations. Recovering Caribbean history as a site crucial to understanding major issues in U.S., Latin American, and Atlantic world history, Dubois and Turits show how events in the larger Caribbean islands, especially Haiti and Cuba, profoundly shaped the fates of the smaller entities, but also how powerful outside interests in Europe and then the United States kept their thumbs on the scales of justice—bending it toward injustice."—Thomas C. Holt, author of Children of Fire