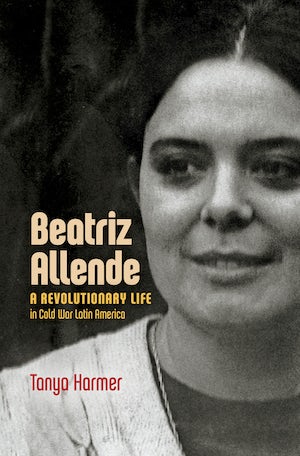 This biography of Beatriz Allende (1942–1977)—revolutionary doctor and daughter of Chile’s socialist president, Salvador Allende—portrays what it means to live, love, and fight for change. Inspired by the Cuban Revolution, Beatriz and her generation drove political campaigns, university reform, public health programs, internationalist guerrilla insurgencies, and government strategies. Centering Beatriz’s life within the global contours of the Cold War era, Tanya Harmer exposes the promises and paradoxes of the revolutionary wave that swept through Latin America in the long 1960s.

Drawing on exclusive access to Beatriz’s private papers, as well as firsthand interviews, Harmer connects the private and political as she reveals the human dimensions of radical upheaval. Exiled to Havana after Chile’s right-wing military coup, Beatriz worked tirelessly to oppose dictatorship back home. Harmer’s interviews make vivid the terrible consequences of the coup for the Chilean Left, the realities of everyday life in Havana, and the unceasing demands of solidarity work that drained Beatriz and her generation of the dreams they once had. Her story demolishes the myth that women were simply extras in the story of Latin America’s Left and brings home the immense cost of a revolutionary moment’s demise.

Tanya Harmer, associate professor of international history at the London School of Economics and Political Science, is the author of Allende’s Chile and the Inter-American Cold War.
For more information about Tanya Harmer, visit the Author Page.

"While previous studies lionized or sentimentalized Beatriz, Harmer roots the subject in the context of the time period and brings to bear her own expertise in Cold War Latin America. A definitive biography of a female revolutionary."--Library Journal

"[An] engaging, beautifully written biography. . . . The text is rich in stories as the author masterfully moves between Beatriz's personal life and the broader political history of Latin America. . . . Highly recommended."--CHOICE Reviews

"In tracing Beatriz’s life and her involvement with key domestic and international events, Harmer moves beyond studying just state-to-state relations or prominent male figures to examine how Cold War Latin America affected everyday people. In this, Harmer shows how women were protagonists and important historical actors in their own right. . . . An important and fascinating read."--H-Nationalism

"A superb book about the 'sad but luminous days' of a female revolutionary."--European Review of Latin American and Caribbean Studies

“Completely absorbing. Harmer vividly tells the story of the short years of the Allende presidency from the standpoint of his daughter and collaborator, Beatriz Allende, a woman central to the history of the Left in Chile. Yet this book is more than a portrait of one individual. Harmer’s engrossing account illuminates the ideas and hopes of a generation of youthful revolutionaries. Examining the failure of Allende’s government and its impact on those who had placed so much hope in it, this book will draw anyone interested in the history of the Left, Chile, Latin America, and gender politics, too.”--Alan Angell, author of Decentralizing Development

“Demolishing the myth that women were at best secondary actors in the Chilean and Latin American Left, Harmer gives readers a close-up view of what it meant to be a revolutionary confronting the United States at the height of the Cold War. Beatriz Allende movingly illustrates the unrecognized contributions Beatriz made to the Chilean and Latin American Left and the enormous price she paid for her work. This book is a convincing demonstration of how much we can learn about the inner workings of politics, governments, and parties through the study of one individual’s life. It is simultaneously a clear, moving history of Beatriz herself, her multiple relationships, both personal and political, and a history of Chile, Latin America, and the Cold War.”—Margaret Power, author of Right-Wing Women in Chile