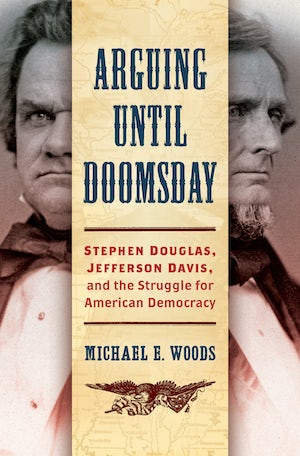 As the sectional crisis gripped the United States, the rancor increasingly spread to the halls of Congress. Preston Brooks's frenzied assault on Charles Sumner was perhaps the most notorious evidence of the dangerous divide between proslavery Democrats and the new antislavery Republican Party. But as disunion loomed, rifts within the majority Democratic Party were every bit as consequential. And nowhere was the fracture more apparent than in the raging debates between Illinois's Stephen Douglas and Mississippi's Jefferson Davis. As leaders of the Democrats' northern and southern factions before the Civil War, their passionate conflict of words and ideas has been overshadowed by their opposition to Abraham Lincoln. But here, weaving together biography and political history, Michael E. Woods restores Davis and Douglas's fatefully entwined lives and careers to the center of the Civil War era.

Operating on personal, partisan, and national levels, Woods traces the deep roots of Democrats' internal strife, with fault lines drawn around fundamental questions of property rights and majority rule. Neither belief in white supremacy nor expansionist zeal could reconcile Douglas and Davis's factions as their constituents formed their own lines in the proverbial soil of westward expansion. The first major reinterpretation of the Democratic Party's internal schism in more than a generation, Arguing until Doomsday shows how two leading antebellum politicians ultimately shattered their party and hastened the coming of the Civil War.

Michael E. Woods is associate professor of history at the University of Tennessee and director of the Papers of Andrew Jackson project.
For more information about Michael E. Woods, visit the Author Page.

"Speaks to the internal tensions within party organizations, the blinding force of ambition, and the ways distrust of democratic processes and institutions can destroy democracy itself. In that, it is a book for our time."--Library Journal

“Even readers who find the Civil War or politics boring could find this well-written narrative gripping. It helps especially now for readers needing to escape the present. All this solid but entertaining history really lacks for is background music.”--New York Journal of Books

“Woods has written one of the most engaging and accessible histories of the pre-Civil War Democratic Party to date. . . . [Arguing Until Doomsday] advances the field of American political history and affords nuance to a period that is always in danger of becoming oversimplified.”--The Civil War Monitor

“This impressive new book . . . deftly recovers the dynamism and disagreements that animated, and ultimately destroyed, the Democratic Party on the eve of the Civil War. . . . Diligently researched, closely argued, and clearly written, Arguing Until Doomsday is an essential book for students of antebellum politics and the road to Civil War.”--Civil War News

“Woods is to be congratulated for a study that is grounded in extensive research, both in primary sources and in the enormous secondary literature. . . . A very readable, informative, and judicious account.”--Journal of the Civil War Era

“Woods’s dual biography is elegantly written, clearly and persuasively argued, and filled with fresh and astute interpretations that restore the antebellum Democracy’s much-neglected complexity and internal diversity.”--Journal of Southern History