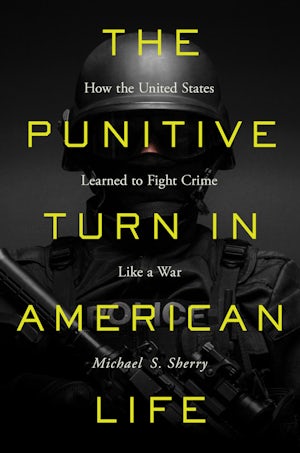 To purchase online via an independent bookstore, visit Bookshop.org
In 1965, President Lyndon Johnson insisted that "the policeman is the frontline soldier in our war against crime," and police forces, arms makers, policy makers, and crime experts heeded this call to arms, bringing weapons and practices from the arena of war back home. The Punitive Turn in American Life offers a political and cultural history of the ways in which punishment and surveillance have moved to the center of American life and become imbued with militarized language and policies. Michael S. Sherry argues that, by the 1990s, the "war on crime" had been successfully broadcast to millions of Americans at an enormous cost--to those arrested, imprisoned, or killed and to the social fabric of the nation--and that the currents of vengeance that ran through the punitive turn, underwriting torture at home and abroad, found a new voice with the election of Donald J. Trump. By 2020, the connections between war-fighting and crime-fighting remained powerful, evident in campaigns against undocumented immigrants and the militarized police response to the nationwide uprisings after George Floyd’s murder. Stoked by "forever war," the punitive turn endured even as it met fiercer resistance.

From the racist system of mass incarceration and the militarization of criminal justice to gated communities, public schools patrolled by police, and armies of private security, Sherry chronicles the United States' slide into becoming a meaner, punishment-obsessed nation.

"Sherry’s new book, The Punitive Turn in American Life, perhaps represents the culmination of his life’s work. . . . While scholars will continue to debate whether the United States has taken a 'punitive turn' over the past seven decades or so, the interlocking ills of forever war, mass incarceration, and policing cannot be denied. Alongside the work of many others, Sherry’s book will help disentangle these threads — and perhaps unmake the punitive society they have formed."--Los Angeles Review of Books

“An important education on the dangers and cultural powers our executives wield with their metaphors. Sherry’s book adds to the body of work that shows American life shifting towards a culture of punishment from the 1960s and 1970s on…bringing insights from his past books on American militarism to the subject of American domestic punishment. The combination is a rich one.” – Criminal Law and Criminal Justice Books

"Written with passion and verve and provocative in the best sense of the word, this is an important contribution to our understanding of contemporary American society."--Marie Gottschalk, author of Caught: The Prison State and the Lockdown of American Politics

"This is the work of a master historian, offering both broad synthetic understandings of American history and passionate engagement. Sherry's focus on the punitive turn is a powerful provocation. He expands the crucially important debates about mass incarceration in significant fashion."--Beth Bailey, author of America’s Army: Making the All-Volunteer Force

"Sherry brilliantly shows how and why vengefulness and surveillance came to be at the center of American public life and understood in the language and logic of war. Coming as the legitimacy of both state and war were faltering as Vietnam was being 'lost,' the consequences were nearly as horrific as those of war itself—civilian death, loss of civil liberties and suspicion of dissent, and racial hatred. Knowing this helps explain how extraordinary and widely ramifying the current moment of resistance is."--Catherine Lutz, author of The Bases of Empire: The Global Struggle against U.S. Military Posts