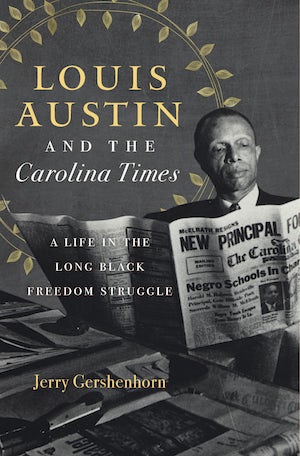 Louis Austin (1898–1971) came of age at the nadir of the Jim Crow era and became a transformative leader of the long black freedom struggle in North Carolina. From 1927 to 1971, he published and edited the Carolina Times, the preeminent black newspaper in the state. He used the power of the press to voice the anger of black Carolinians, and to turn that anger into action in a forty-year crusade for freedom.

In this biography, Jerry Gershenhorn chronicles Austin’s career as a journalist and activist, highlighting his work during the Great Depression, World War II, and the postwar civil rights movement. Austin helped pioneer radical tactics during the Depression, including antisegregation lawsuits, boycotts of segregated movie theaters and white-owned stores that refused to hire black workers, and African American voting rights campaigns based on political participation in the Democratic Party. In examining Austin’s life, Gershenhorn narrates the story of the long black freedom struggle in North Carolina from a new vantage point, shedding new light on the vitality of black protest and the black press in the twentieth century.

"Convincingly argues that Austin merits a place of prominence for being 'one of the most fearless and effective' of southern black journalists. . . . Carefully researched, well-written, and an important addition to the scholarship of the black press, as well as the history of North Carolina."--Journalism History

"Both a good read and a valuable piece of scholarship. . . . A rich and nuanced study based on extensive archival research. [This] biography of Austin makes significant contributions in the fields of Southern history, civil rights, and journalism history."--North Carolina Historical Review

“Jerry Gershenhorn recovers the inspiring story of Louis Austin—journalist, proprietor, and editor of the Durham, North Carolina, Carolina Times. In recounting Austin’s leadership in the local African American community, Gershenhorn tells us a larger tale that highlights the importance of advocacy journalism in the pursuit of truth and justice.”--Journal of Southern History

“Until Jerry Gershenhorn’s book, there had been no book-length treatment of Louis Austin, a titan of the movement in North Carolina. Gershenhorn’s thoroughly researched book will be a welcome addition.”--Charles McKinney Jr., Rhodes College

“This is a fine-grained portrait of the life of Louis Austin, the brilliant, fiery, indefatigable African American editor of the Carolina Times, North Carolina’s most important black newspaper. It will make an essential and absorbing contribution to the story of the black press, the African American freedom struggle in the South, and the history of North Carolina.”--Timothy B. Tyson, author of Blood Done Sign My Name

“Fearless newspaper editor and freedom fighter Louis Austin worked for decades to lay the foundation for the civil rights movement that matured in the 1950s. Austin's grasp of legal strategy and publicity campaigns in the 1930s and 1940s molded a generation of activists who followed his lead. Gershenhorn does justice to this virtually unknown hero, and the book will become a classroom favorite in classes on African American freedom struggles in the twentieth century.”—Glenda Gilmore, Yale University