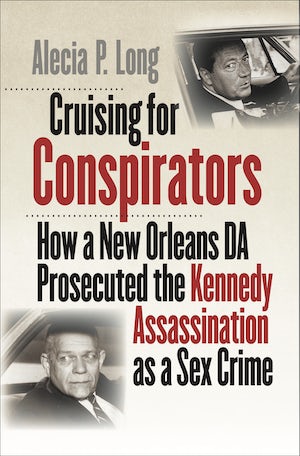 To purchase online via an independent bookstore, visit Bookshop.org
New Orleans district attorney Jim Garrison's decision to arrest Clay Shaw on March 1, 1967, set off a chain of events that culminated in the only prosecution undertaken in the assassination of John F. Kennedy. In the decades since Garrison captured headlines with this high-profile legal spectacle, historians, conspiracy advocates, and Hollywood directors alike have fixated on how a New Orleans–based assassination conspiracy might have worked. Cruising for Conspirators settles the debate for good, conclusively showing that the Shaw prosecution was not based in fact but was a product of the criminal justice system's long-standing preoccupation with homosexuality.

Tapping into the public's willingness to take seriously conspiratorial explanations of the Kennedy assassination, Garrison drew on the copious files the New Orleans police had accumulated as they surveilled, harassed, and arrested increasingly large numbers of gay men in the early 1960s. He blended unfounded accusations with homophobia to produce a salacious story of a New Orleans-based scheme to assassinate JFK that would become a national phenomenon.

At once a dramatic courtroom narrative and a deeper meditation on the enduring power of homophobia, Cruising for Conspirators shows how the same dynamics that promoted Garrison's unjust prosecution continue to inform conspiratorial thinking to this day.

"Solidly researched and expertly written...Not a typical screed of conspiracy-or-not arguments that characterize the JFK assassination literature...It is a bit unusual to find research of this caliber in the literature on the JFK assassination...Cruising for Conspirators might well be read as an inoculation against whatever fiction Oliver Stone will deliver in his new documentary."--Washington Decoded

“This shocking narrative uncovers how decades of police surveillance in New Orleans created a vast paper trail that set the stage for a corrupt district attorney to frame the only man to face prosecution for John F. Kennedy’s assassination, creating a lasting homophobic conspiracy theory in the process. With keen historical sensitivity, Alecia Long reveals the longer patterns and plots that frame this must-read story.”— Jim Downs, author of Stand by Me: The Forgotten History of Gay Liberation

In Cruising for Conspirators Alecia Long offers us a fresh new perspective on an endlessly enthralling subject—the alleged conspiracy behind the assassination of John F. Kennedy—revealing how a pervasive cultural and institutional homophobia shaped the prosecution of the only person ever tried in the affair. This is an engrossing and important book, meticulously researched and profoundly relevant to our country’s ongoing attempts to grapple with the deep-rooted inequities of its past.”—Gary Krist, author of The Mirage Factory and Empire of Sin