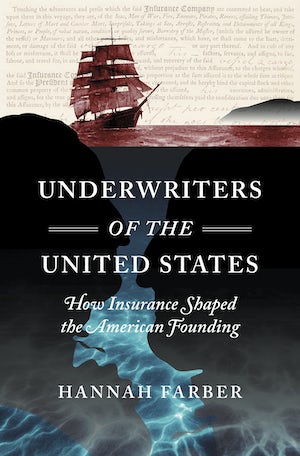 Unassuming but formidable, American maritime insurers used their position at the pinnacle of global trade to shape the new nation. The international information they gathered and the capital they generated enabled them to play central roles in state building and economic development. During the Revolution, they helped the U.S. negotiate foreign loans, sell state debts, and establish a single national bank. Afterward, they increased their influence by lending money to the federal government and to its citizens. Even as federal and state governments began to encroach on their domain, maritime insurers adapted, preserving their autonomy and authority through extensive involvement in the formation of commercial law. Leveraging their claims to unmatched expertise, they operated free from government interference while simultaneously embedding themselves into the nation’s institutional fabric. By the early nineteenth century, insurers were no longer just risk assessors. They were nation builders and market makers.

Deeply and imaginatively researched, Underwriters of the United States uses marine insurers to reveal a startlingly original story of risk, money, and power in the founding era.

Hannah Farber is assistant professor of history at Columbia University.
For more information about Hannah Farber, visit the Author Page.

"Property insurance is everywhere, but it is rarely prominent in the public mind...This excellent academic analysis of underwriting in the American shipping industry, up until 1860, has much to say about America today...As Farber’s entire book shows, insurance is, and always has been, a political business."—American Affairs Journal

"Surveying the early United States from the vantage point of the marine insurance office, Hannah Farber makes readers think anew about the American Revolution and the unsettled decades that followed. With deep research and lucid prose, she fathoms an ocean of risk, and plumbs the moral philosophy of the paper pushers who trawled for profit in those stormy seas, and who shaped the fragile new nation in the process."—Jane Kamensky, Harvard University

“Farber fills her pages with a fantastically colorful community of characters at work in the often-shadowy underworld of finance. She has made people—and not always well-known leaders—come alive. That is rare in business history.”—David J. Hancock, University of Michigan

“Addressing a subject that other scholars have overlooked, Farber makes a significant contribution to our understanding of the early republic. Insurance companies not only supported the expansion of American maritime enterprise and economic development; they also invested the capital they raised to underwrite the national government created by the Constitution of the United States. A premier example of scholarship revealing how money shaped the state.”—Paul A. Gilje, University of Oklahoma