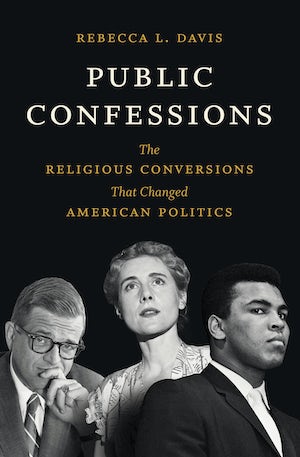 Personal reinvention is a core part of the human condition. Yet in the mid-twentieth century, certain private religious choices became lightning rods for public outrage and debate.

Public Confessions takes intimate history to its widest relevance, and in so doing, makes you see yourself in both the private and public stories it tells.

Rebecca L. Davis is Miller Family Early Career Professor of History at the University of Delaware. She is the author of More Perfect Unions: The American Search for Marital Bliss.

"A sterling history of mid-20th-century religious conversions and the social issues surrounding them. . . . This impressive work captures a fraught period in American political and religious history with a clear eye and insightful reasoning."—Publishers Weekly, starred review

"Davis deftly connect[s] her history of public converts, who helped clarify voters’ views on race and democracy, among other issues, to the rise of the religious right...It isn’t hard to see the parallels for both Trump and Biden in Davis’s history...Like it or not, religion and politics find ways to mix. As issues of special religious significance—particularly abortion—heat up, it may be impossible for the president to escape the world that Davis outlines."—Washington Monthly

"The importance of the book, though, is not celebrity conversions. It is about the mixing of religion and politics in U.S. public life, often blurring the line between religious beliefs and political agendas."—Catholic Sentinel

"Fascinating...Public Confessions offers readers ample opportunities to ask themselves whom they believe and why, as well as what might make their own professions of faith believable to a watching world."—Christianity Today

"The amount of ground that Davis covers, and the care with which she covers it, in just 180 pages is astounding...Davis’s empathy and wit as a narrator put her, in my book, on par with the best biographers."—Journal of Social History