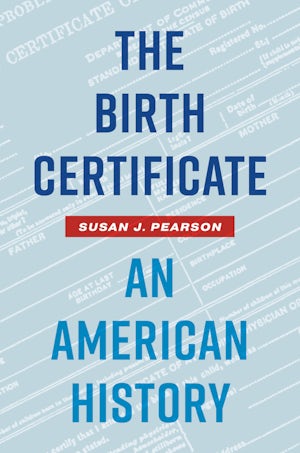 For many Americans, the birth certificate is a mundane piece of paper, unearthed from deep storage when applying for a driver’s license, verifying information for new employers, or claiming state and federal benefits. Yet as Donald Trump and his fellow “birthers” reminded us when they claimed that Barack Obama wasn’t an American citizen, it plays a central role in determining identity and citizenship.

In The Birth Certificate: An American History, award-winning historian Susan J. Pearson traces the document’s two-hundred-year history to explain when, how, and why birth certificates came to matter so much in the United States. Deftly weaving together social, political, and legal history, The Birth Certificate is a fascinating biography of a piece of paper that grounds our understanding of how those who live in the United States are considered Americans.

Susan J. Pearson is associate professor of history at Northwestern University and the author of The Rights of the Defenseless: Protecting Animals and Children in Gilded Age America.

“An exceedingly fine book, deeply and impressively researched, excavating a story that modern American historians simply did not know until now.”—Sarah E. Igo, author of The Known Citizen: A History of Privacy in Modern America