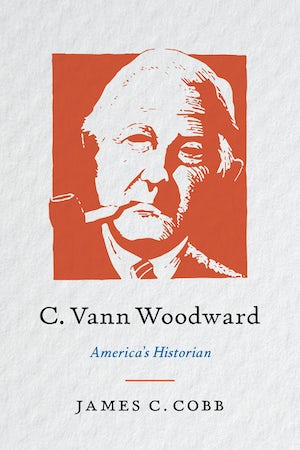 With an epic career that spanned two-thirds of the twentieth century, C. Vann Woodward (1908–1999) was a historian of singular importance. A brilliant writer, his work captivated both academic and public audiences. He also figured prominently in the major intellectual conflicts between left and right during the last half of the twentieth century, although his unwavering commitment to free speech and racial integration that affirmed his liberalism in the 1950s struck some as emblematic of his growing conservatism by the 1990s. Woodward's vision still permeates our understandings of the American South and of the history of race relations in the United States. Indeed, as this fresh and revealing biography shows, he displayed a rare genius and enthusiasm for crafting lessons from the past that seemed directly applicable to the concerns of the present—a practice that more than once cast doubt on his scholarship.

James C. Cobb offers many original insights into Woodward's early years and private life, his long career, and his almost mythic public persona. In a time where the study and substance of American history are profoundly contested, Woodward's career is replete with lessons in how myths about the past, some created by historians themselves, come to be enshrined as historical truth.

James C. Cobb is B. Phinizy Spalding Professor Emeritus of History at the University of Georgia.
For more information about James C. Cobb, visit the Author Page.

"Drawing on his subject’s writings and his voluminous papers at Yale, where Woodward taught from 1961 to 1977, Cobb portrays a scholar impatient with the mythologies, distortions and misguided hero worship that for most of the 20th century inhibited discussion of the South’s many problems."—Eric Foner, London Review of Books

"Cobb comments intelligently on Woodward’s many scholarly works and essays. He is particularly sensitive to the ways in which Woodward, in writing about historical events, was also working out his own loyalties as a Southerner."—Wall Street Journal

"A richly detailed biography . . . A rewarding read for scholars of Southern and 20th-century historical references in the United States."—Library Journal

"A deep, generous, and honest account of C. Vann Woodward's remarkable life.  The result is not only a humane biography of an important figure but also an eloquent account of the victories and defeats of white liberalism across the twentieth century." —Edward L. Ayers, author of The Promise of the New South

"This is not only a book about a prominent historian, or about the academic profession. This is a book about America, about how all of us have come to see our past, and how that has changed the present."—David Goldfield, author of America Aflame: How the Civil War Created a Nation

"A masterful and exhaustively researched intellectual biography of probably the most important historian of the American South."—Joseph Crespino, author of Atticus Finch: The Biography