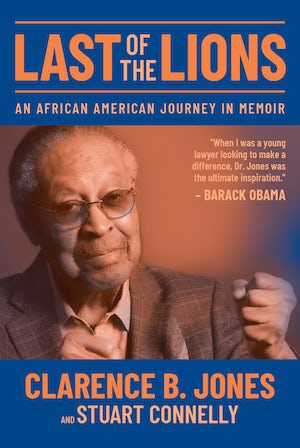 Last of the Lions is two histories woven into one remarkable story. It’s a personal history – the evocative life of Clarence B. Jones, from his depression- and segregation-era upbringing at the hands of caring Irish Catholic nuns through our current era (when America elected a President to follow the first black man to hold the office with a man dog-whistling to white supremacists for four years). And all the amazing moments in between – his Ivy League years, his unprecedented dual role as simultaneous military draftee and protester, his work as an entertainment lawyer, financial and media entrepreneur, and more. But it’s also the coming-of-age story of this country, with the kind of intimate observations and thought-provoking perspective that unfurl in classics like Soul on Ice, On the Road, and The Feminine Mystique.

Between the time Jones was born and today, the landscape of America’s relationship with her black citizenry has experienced a sea change. Jones is the bridge from one America to another – spanning poverty and prosperity, injustice and acceptance, Harlem and Wall Street, even spanning the militant philosophy of the radical black Nation of Islam and the Gandhian philosophy of Dr. King. His story is the connective tissue that clarifies our past, explains our present, and points to the way to the future. Jones suffered the iniquities, fought the battles, and unlike so many, lived to see both the fruits of his labor and its failings. But this book is far from a treatise on race; Jones witnessed (and participated in) nearly every one of the most important political and social movements from the 1950s right up until today. Eight crucial decades that defined the “American Experience” and Jones was in the thick of it.

Last of the Lions offers a vibrant perspective on human nature and light and dark sides of American values. Jones presents a guide to the ever-pressing – and even after 400 years the still-unfinished – business in our country: the erasing of the color line. Ferguson could have happened half a century ago, but it happed half a decade ago. A path to true freedom laid out by perhaps the only man alive with the personal experience and social context to tackle the issue head-on. History never felt so present, philosophy so urgent.

Clarence B. Jones served as speechwriter and counsel to Dr. Martin Luther King, Jr., partnered with Sanford I. Weill and Arthur Levitt, Jr. in the Wall Street investment banking firm Carter, Berlind & Weill, and was the editor-in-chief and publisher of the Amsterdam News. Dr. Jones has been visiting professor at Stanford University and the scholar-in-residence at Stanford’s Martin Luther King, Jr. Institute and co-founder of the Clarence B. Jones Institute for Non-Violence and Social Justice at the University of San Francisco.
For more information about Clarence B. Jones, visit the Author Page.

Author, screenwriter and director Stuart Connelly has been a professional storyteller for more than twenty-five years. A graduate of Syracuse University’s S.I. Newhouse School of Public Communications, he is the author of several books including the award-winning Behind the Dream: The Speech That Transformed a Nation, (his first collaboration with Dr. Jones) and the upcoming family memoir Offered In Secret
For more information about Stuart Connelly, visit the Author Page.

“When I was a young lawyer looking to make a difference, Dr. Jones was the ultimate inspiration.”—President Barack Obama (August 2021)