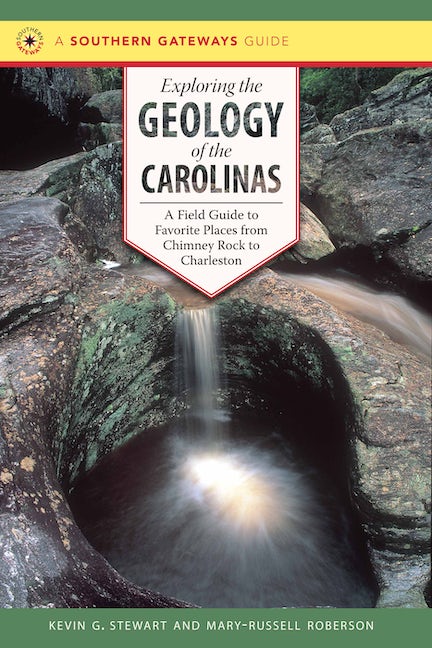 Spotlight on: Kevin G. Stewart and Mary-Russell Roberson authors ofExploring the Geology of the Carolinas: A Field Guide to FavoritePlaces from Chimney Rock to Charleston on discovering the geologicalsites of the two states that really rock.

Q: Of all the areas explored in your book, which was your favorite one to visit and why?

Mary-Russell: I love waterfalls,so I'm especially fond of Stone Mountain State Park, DuPont StateForest, and Chimney Rock Park. Stone Mountain is a big expanse of barerock, which is beautiful to look at and fun to hike on. I also reallylike JockeyÕs Ridge State Park because there are so many gorgeouspatterns in the sand to explore.

Kevin: I find myself drawn tothose places that tell a really spectacular geologic story, as well asbeing scenic. So my favorites are Mount Mitchell, Grandfather Mountain,and, perhaps surprisingly, Flanner Beach. Flanner Beach may seem likejust a quiet strip of sand along the Neuse River, but the sedimentlayers there provide a very clear record of how sea level can risedramatically during a global warming event.

Q: What sorts of attributes make the landscapes of the Carolinas unique? What inspired you to write about this region in particular?

Mary-Russell: I wanted to write abook about the geology of the Carolinas for a general audience becauseseveral years ago I went looking for a book like that and it didn'texist! The geology here is complex because there have been lots ofcontinental collisions and rifts that have deformed the bedrock.Sometimes itÕs hard to find the bedrock under all the vegetation, butwhen you do itÕs always fascinating.

Kevin: There aren't many places onEarth where you can see such geologic variety all within a dayÕs drive.All of these different rocks and landscapes are part of a reallyinteresting geologic story that begins almost two billion years ago. Itis this rich and diverse history that motivated me to write this book,and it continues to motivate me to research the geology of the Carolinas.

Q: What was the biggest challenge in taking a scientific field such as geology and writing it "in a way that nonscientists can understand," as you state in the book's preface?

Mary-Russell: It's always a challenge to explain complex concepts in a way that keeps the reader's interestÑand itÕs a challenge I really enjoy.

Kevin: So much of geology is notintuitive, such as an event that happened millions of years ago or aprocess occurring deep in the EarthÕs mantle, where we can't see it.ItÕs a challenge to present these kinds of topics in a way that is clearand simple, but not so simple that people get the wrong idea.

Q: One of you is a geology professor and the other is a science writer. What was it like to collaborate on this book?

Mary-Russell: Both of us care agreat deal about accuracy and clarity. It worked well to have one of us(Kevin) focusing on the accuracy of the content and the other one of us(me) focusing on the clarity of the writing. First we would talk aboutthe major points to include in a chapter, then I would write a firstdraft that left plenty of holes for Kevin to fill in. HeÕd go throughand add information, then give it back to me to polish the prose. Someof the chapters went back and forth more than a dozen times!

Kevin: The collaboration workedvery well for the reasons that Mary-Russell stated. In addition,Mary-Russell contributed a lot of content explaining how the geologyaffected the recent human history of the Carolinas.

Q: What are the major geological differences between North and South Carolina?

Kevin: The state line was drawnlong after the geology was created, so there really aren't any majordifferences. The boundaries between the major geologic terranes trendnortheast-southwest, and they cut right across the state line. Onedifference is that North Carolina extends a bit farther west than SouthCarolina, so South Carolina doesn't have the billion-year-old rocks ofthe western Blue Ridge Mountains.

Q: Some of your sites are museums—the N.C.Museum of Natural Sciences and the Museum of Life and Science, forexample. What are some other public resources for those interested inlearning the geologic history of the Carolinas?

Kevin: Both the North Carolina andSouth Carolina geological surveys have websites and publications aimedat the public. The Museum of North Carolina Minerals, located at thejunction of the Blue Ridge Parkway and North Carolina Highway 226(milepost 331), has great rock and mineral displays, as well aseducational information. The South Carolina State Museum in Columbiahas an exhibit called Carolina Natural that showcases insectcollections, shells, and a wide variety of animal and plant fossils,including the skull of a saber-toothed cat found in South Carolina.

Q: How does the geology of the Carolinas helpus learn more about the cultural history of theregion?

Mary-Russell: Geology hasinfluenced our culture in many ways. For example, the first gold rush inthe United States was in North Carolina. Many historians think that goldmining encouraged the development of engineering and mechanicalknowledge and skills that later set the stage for the Carolina Piedmontto become a leader in manufacturing textiles and furniture.

Kevin: Settlers needed waterpowerfor their mills, so many early inland towns such as Roanoke Rapids,Rocky Mount, and Columbia arose where the hard rock of the Piedmontmeets the soft sediments of the Coastal Plain. At this boundary, knownas the Fall Zone, the rivers drop rapidly, and the waterfalls locatedthere were perfect for powering mills.

Q: You often discuss fault movements anderosion in the book. Are there any areas in particular that are moredangerous because of these natural geologic processes?

Kevin: There was a magnitude 7quake near Charleston, South Carolina, in 1886, so clearly this is anarea that is susceptible to large, damaging earthquakes. Smallerearthquakes are common in the western part of the Carolinas, but theyrarely exceed magnitude 3, which is too small to create any damage. Thegreatest hazards are landslidesÑthe 2004 Peeks Creek landslide destroyed15 homes and killed 5 people.

Q: Are any of these natural sites protected?If not, what kinds of threats do they face, either by natural or humanelements?

Mary-Russell: About half of thesites are in state parks. Most of the others are in national or stateforests, state historic sites, or are protected by private groups suchas the Nature Conservancy. Chimney Rock Park was privately owned by afamily that recently sold the park to the state of North Carolina. Itwill eventually be part of the new Hickory Nut Gorge State Park.

Kevin: All the places are subjectto the normal wear and tear of erosion, but the most fragile parts ofthe Carolinas are along the coast. Barrier islands are essentially pilesof sand, and storms can move huge quantities of sand in just a few hoursor days. Global warming and the associated rise in sea level threatenall of the low-lying coastal areas in the Carolinas.

Q: Who is this book written for?

Mary-Russell: We thought of ourprimary audience as curious people who like to spend time outdoors andwould be interested in learning about a new way of understanding whatthey see. With just a little knowledge and inspiration, everyone cannotice rocks and landforms and speculate about how they might haveformed. We think our book will also be a great resource for earthscience teachers in the Carolinas and their students.

Kevin: It's also a good resourcefor professional geologists. We included the most up-to-date research onthe geology of the Carolinas, so although the language is simple, theconcepts are sophisticated and current.