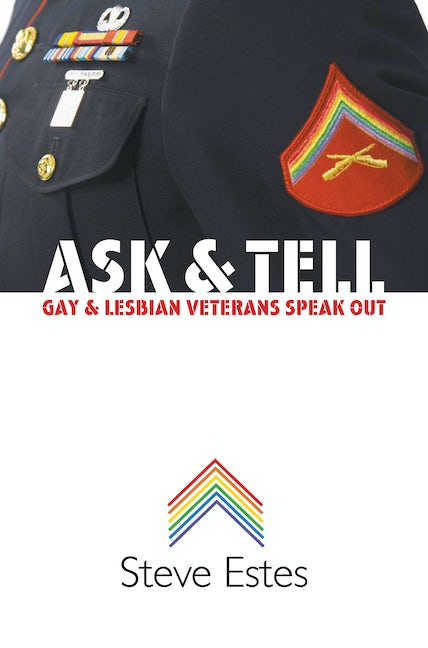 A conversation with Steve Estes, author of Ask and Tell: Gay and Lesbian Veterans Speak Out, on the role of firearms in women's lives„from fashion on the history, valor, and continuing struggles of gays in the U.S. military.

Q: Can you briefly outline the major changes that have occurred in homosexual policy from World War II to the war in Iraq?

A: On one hand, the most obvious policy change occurred in 1993 when the passage of "Don't Ask, Don't Tell" allowed gays to serve as long as they were not open about their sexuality. On the other hand, that directive simply formally acknowledged what had long been the policy of the U.S. military. It allowed most gays and lesbians to serve quietly and honorably in times of need and discharged them in larger numbers when manpower needs decline during peacetime.

Q: How does the United State's current military policy regarding homosexual enlistment differ from other countries?

A: The U.S. stands nearly alone among developed nations in banning the service of openly gay troops. Among the original members of the North Atlantic Treaty Organization, only the U.S. and Portugal ban gay and lesbian service personnel. Nine of the countries with troops fightingalongside American forces in Iraq and twelve of our allies fighting in Afghanistan allow gays to serve. Countries that have lifted the ban since the 1970s include Australia, Britain, Canada, the Czech Republic, France, Germany, Italy, the Netherlands, and Spain.

Q: How did your involvement in other projects involving gays in the military influence ASK AND TELL?

A: I began interviewing GLBT vets after I saw a call for such interviews by the Human Rights Campaign, which is a gay rights group, in 2002. Originally I got into this as an activist, wanting to use my skills as a historian and interviewer to support what I saw as a civil rights issue. When I contacted HRC, they told me about the Veterans History Project run by the Library of Congress. They also put me in touch with American Veterans for Equal Rights, as well as a predominantly gay AmericanLegion Post in San Francisco. I started interviewing folks from San Francisco for the Library of Congress project and found that the vets were really excited to tell their stories. These original interviewees put me in touch with their friends from around the country, and the oral history project grew from there. I really couldn't have done this project without help from HRC, AVER, Servicemembers Legal DefenseNetwork, Military Equality Alliance, the GLBT Historical Society, and the Michael Palm Center.

Q: What was it like to interview these men and women who bravely served their country while dealing with the fear that their sexuality might be discovered?

A: More than half of my interviewees came of age before the modern gay rights movement, so they had learned to deal with a homophobia in society at large that was really not that much different from the military. They would have faced similar pressure in any career, but they felt the call of duty to serve their country. For many of the veterans who served after the 1970s, there was a disconnect between their lives in uniform and out, but all of these vets said that their first allegiance was to the military. Sexuality had very little to do with their job performance or their experiences in combat, other than the fact that the military thought it did.

Q: Were there noticeable differences in the experiences of gays and lesbians in the military, based on their gender?

A: Lesbians make up a disproportionate number of discharges as a result of homosexuality. This is just one indication that women face the brunt of "Don't Ask, Don'tTell." The other side of this story is that the ban on gay service personnel puts all military women in a catch-22. Whether they are gay or not, military women need to prove that they are straight, leaving them more vulnerable to sexual harassment.

Q: Was there an interrogation process given to service members who were suspected to be homosexual?

A: Though the regulations and laws have changed, the interrogation techniques have remained largely the same. I interviewed veterans interrogated in every decade since the1940s. They were brought into a room with members of the criminal investigation division of their respective services and told that the military had proof that they were gay. They were asked to reveal the names of other gay or lesbian personnel. Several of my interviewees survived such witch-hunts and served the rest of their careers honorably. Others—good soldiers, sailors, airmen, and marines—were given dishonorable discharges and sent home in disgrace. Homosexuality per se is no longer grounds for a dishonorable discharge, but "Don’t Ask, Don’t Tell" has certainly not stopped the interrogation and separation of good men and women.

Q: What was the "Lavender Scare," and how did it affect the lives of gays in the military?

A: The "Lavender Scare" is a term coined by historian David Johnson for the fear and persecution of homosexuals that accompanied the fear of communists during the Red Scare of the 1950s. Though the Korean War took place at the height of the Lavender Scare, most Korean War veterans I spoke with said that there was more tolerance of homosexuality over in the Asian theater of war, while purges of gays from the military and federal government were much worse on the home front and following the armistice.

Q: How did gays in the military react to President Clinton's "Don't Ask, Don't Tell" directive?

A: When Clinton initially promised to lift the ban during the 1992 presidential campaign, there was a sense of hope among GLBT vets and active duty folks. But such hope quickly turned to frustration and despair as the campaign promise was compromised in "Don't Ask, Don't Tell." Most gays in the military saw this as simply a new paint job on an old closet door.

A: The military has dealt with homosexuality in three ways since the start of World War II. If soldiers were caught in the act of homosexual intercourse, they could be subject to court martial and jail time. If they admitted that they were gay before 1981, they could be given a dishonorable discharge, meaning that they would lose all benefits. After 1981 and increasingly following the passage of "Don't Ask, Don't Tell," service personnel who have admitted that they were gay have received an honorable discharge from the service. Although that has been the letter of the law, enforcement has varied widely from post to post and over time depending on the manpower needs of the military.

Q: What kinds of post-service careers and occupations are the veterans you interviewed involved in?

A: I interviewed a pretty diverse group of people for this book. These men and women returned from military service overseas to become teachers, doctors, computer technicians, lawyers, preachers, professors, and construction workers.

Q: What can readers gain from your book in light of the current debate about gays in the military?

A: Obviously, this is not the first book on gays in the military, but I think that what this book does well is chronicle the long history of gay and lesbian service from World War II to the current conflicts in Iraq and Afghanistan. The book shows that the arguments the military uses to defend the ban are simply not true. Gay and lesbian troops are not security risks. They do not damage morale or unit cohesion. They are already in the military and pose no threat to the privacy of straight service personnel. Above all, I hope that this book reminds policymakers and Pentagon officials what they should already know, that the history of gay and lesbian military service is long and valorous, and that it is really just the story of patriotic Americans doing their duty and serving their country.