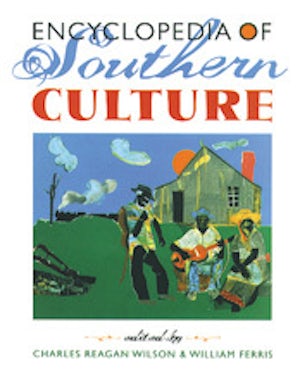 A 1990 Outstanding Reference Source, ALA Booklist

The American South is a geographical entity, a historical fact, a place in the imagination, and the homeland of an array of Americans who consider themselves southerners. The region is often shrouded in romance and myth, but its realities are as intriguing, as intricate, as its legends.

The Encyclopedia of Southern Culture is "the first attempt ever" notes U.S. News & World Report, "to describe every aspect of a region's life and thought, the impact of its history and policies, its music and literature, its manners and myths, even the iced tea that washes down its catfish and cornbread."

There are many Souths, many southerners. The region's fundamental uniqueness, in fact, lies in its peculiar combination of cultural traits, a somewhat curious, often elusive blend created by blacks and whites who have lived together for more than 300 years. In telling their stories, the Encyclopedia of Southern Culture ranges from grand historical themes to the whimsical; from the arts and high culture (William Faulkner and Leontyne Price) to folk culture (quilts, banjos, and grits) to popular culture (Gilley's and Gone With the Wind).

The Encyclopedia's definition of the South is a cultural one: the South is found wherever southern culture is found. Although the focus is on the eleven states of the former Confederacy, this volume also encompasses southern outposts in midwestern and middle-Atlantic border states, even the southern pockets of Chicago, Detroit, and Bakersfield.

To foster a deeper understanding of the South's cultural patterns, the editors have organized this reference book around twenty-four thematic sections, including history, religion, folklore, language, art and architecture, recreation, politics, the mythic South, urbanization, literature, music, violence, law, and media. The life experiences of southerners are discussed in sections on black life, ethnic life, and women's life. Throughout, the broad goal is to identify the forces that have supported either the reality or the illusion of the southern way of life -- people, places, ideas, institutions, events, symbols, rituals, and values.

The Encyclopedia of Southern Culture was developed by the Center for the Study of Southern Culture at the University of Mississippi. Contributors to the volume include historians, literary critics, sociologists, anthropologists, geographers, linguists, theologians, folklorists, architects, ecologists, lawyers, university presidents, newspaper reporters, magazine writers, and novelists.

William R. Ferris is the Joel R. Williamson Eminent Professor of History, Senior Associate Director of the Center for the Study of the American South, and Adjunct Professor of Folklore at the University of North Carolina at Chapel Hill. A former chair of the National Endowment for the Humanities, he has made numerous documentary films and has authored over 100 publications in the fields of folklore, history, literature, and photography. Give My Poor Heart Ease, his book of interviews with Delta blues greats, was published by UNC Press in 2009.


For more information about William Ferris, visit the Author Page.

"A discriminating guide to Dixology."--Esquire

"The Encyclopedia shimmers with information about a region veiled in legend."--Smithsonian

"An invaluable piece of work, a resounding reaffirmation that the South does indeed exist in fact as well as myth, despite and because of the profound and often wrenching changes of the past three decades."--Hodding Carter, Washington Post

"There are treasures within that make the book a favorite for readers above or below the Mason-Dixon line."--Newsweek

"As definitive a survey of the South as could be wished for."--Economist

"An exhaustive work. . . . The book's very existence defends the notion--disputed by some scholars--that the South is indeed a unique regional culture, far different from the American norm."--Vogue