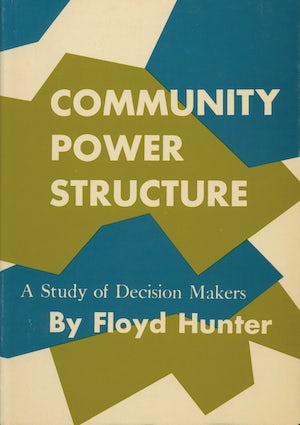 To purchase online via an independent bookstore, visit Bookshop.org
In this study of busy, complex Regional City -- and it is a real city -- the author has analyzed the power structure from top to bottom. He has searched out the men of power and, under fictitious names, has described them as they initiate policies in their offices, their homes, their clubs. They form a small, stable group at the top of the social structure. Their decision-making activities are not known to the public, but they are responsible for whatever is done, or not done, in their community.

Beneath this top policy group is a clearly marked social stratification, through which decisions sift down to the substructures chosen to put them into effect. The dynamic relations within the power structure are made clear in charts, but the real interest lies in the author's report of what people themselves say. The African American community is also studied, with its own power structure and its own complicated relations with the large community. The method of study is fully described in an Appendix.

The book should be of particular value to sociologists, political scientists, city-planning executives, Community Council members, social workers, teachers, and research workers in related fields. As a vigorous and readable presentation of facts, it should appeal to the reader who would like to know how his/her own community is run.

Community Power Structure is not an exposé. It is a description and discussion of a social phenomenon as it occured. It is based on sound field research, including personal observation and interviews by the author.

“Sets forth the power structure in one community with beautiful clarity."--American Journal of Politics