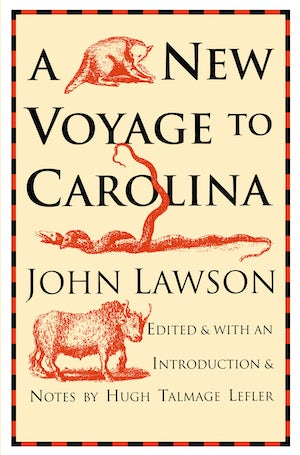 John Lawson's amazingly detailed yet lively book is easily one of the most valuable of the early histories of the Carolinas, and it is certainly one of the best travel accounts of the early eighteenth-century colonies. An inclusive account of the manners and customs of the Indian tribes of that day, it is also a minute report of the soil, climate, trees, plants, animals, and fish in the Carolinas.

Lawson's observation is keen and thorough; his style direct and vivid. He misses nothing and recounts all -- from the storms at sea to his impressions of New York in 1700, the trip down the coast to Charleston, and his travels from there into North Carolina with his Indian guides.

The first edition of this work was published in London in 1709. While various editions followed in the eighteenth century -- including two in German -- this edition is a true copy of the original and is the first to include a comprehensive index. It also contains "The Second Charter," "An Abstract of the Constitution of Carolina," Lawson's will, and several previously unpublished letters written by Lawson. A number of DeBry woodcuts of John White's drawings of Indian life, sketches of the beasts of Carolina which appeared in the original 1709 edition, and Lawson's map contribute additional interest to this volume.

John Lawson, explorer, surveyor, and naturalist, was from the Yorkshire region of England. He arrived in the Carolinas in 1700 and soon after began the first of a series of travels in the region. Eventually, he took up residence in present-day Bath, North Carolina, and in 1708 became the official surveyor for the Lords Proprietors of Carolina. In the late summer of 1711, on another trip to explore the interior of the region, Lawson was captured and put to death by Tuscarora Indians.
For more information about John Lawson, visit the Author Page.