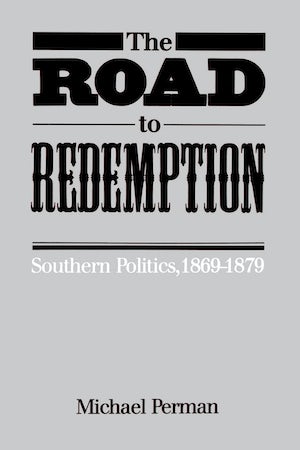 One of the most dramatic episodes in American history was the attempt to establish a two-party political system in the South during Reconstruction. Historians, however, have never systematically analyzed the region's political process during that era. Michael Perman undertakes this task, arguing that the key to understanding Reconstruction politics can be found in the factions that developed inside the two parties. Not only did these factions play a crucial role in determining each party's policies and electoral strategies, but they also shaped the course of the South's overall political development during this critical period.

In the first section of Road to Redemption, Perman offers a provocative and original analysis of the characteristics and priorities of the two parties, explaining how the South's untried and volatile party system operated during Reconstruction. By the mid-1870s this system had begun to collapse. The book's concluding section explains how and why the Republican party and Reconstruction were overthrown and describes the Democratic ascendancy that replaced them.

Perman's innovative study integrates the history of Reconstruction and Redemption and challenges the prevailing interpretation of who the Redeemers were and how they rose to power.

Michael Perman is research professor in the humanities at the University of Illinois at Chicago. He has written or edited seven books in American history, including Struggle for Mastery: Disfranchisement in the South, 1888-1908 and Emancipation and Reconstruction. He has also held a Guggenheim Fellowship and won three book prizes.


For more information about Michael Perman, visit the Author Page.