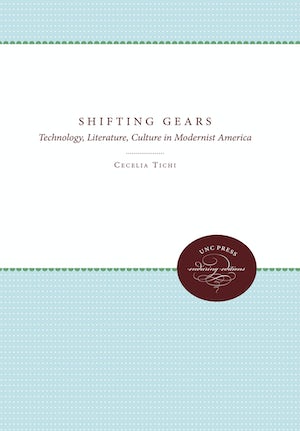 Shifting Gears is a richly illustrated exploration of the American era of gear-and-girder technology. From the 1890s to the 1920s machines and structures shaped by this technology emerged in many forms, from automobiles and harvesting machines to bridges and skyscrapers. The most casual onlooker to American life saw examples of the new technology on Main Street, on the local railway platform, and in the pages of popular magazines.

A major consequence of this technology was its effect on the arts, in particular the literary arts. Three prominent American writers of the time -- Ernest Hemingway, John Dos Passos, and William Carlos Williams -- became designer-engineers of the word. Tichi reveals their use of prefabricated, manufactured components in poems and prose. As designers, they enacted in style and structure the new technological values. The writers, according to Tichi, thought of words themselves as objects for assembly into a design.

Using materials from magazines, popular novels , movie reviews, the toy industry, and advertising, as well as the texts of the nation's major enduring writers, Tichi shows how turn-of-the-century technology pervaded every aspect of American culture and how this culture could be defined as a collaborative effort of the engineer, the architect, the fiction writer, and the poet. She demonstrates that a technological revolution is not a revolution only of science but of language as well.

"A fascinating account of the national obsession with eliminating instability and waste through technology. [Tichi's] account of the emergence of these themes in popular literature is equally engrossing and convincing."--Alexander Nehamas, New York Times Book Review

"Offers an original way of viewing the machine's impact on so-called modernist writing. By evaluating literature in a cultural context, Cecelia Tichi shows how technology changed both perception and language."--Winterthur Portfolio

"Asserting the interlock of the arts and technological sciences in our culture, Tichi illuminates new areas of investigation, demonstrating connections and influences where none have before been suspected."--John Seelye, University of Florida