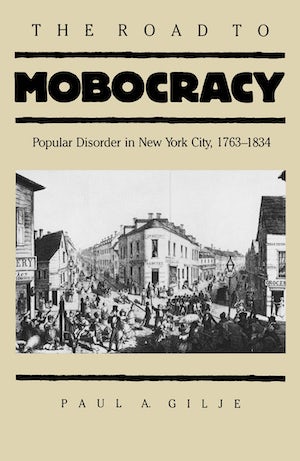 The Road to Mobocracy is the first major study of public disorder in New York City from the Revolutionary period through the Jacksonian era. During that time, the mob lost its traditional, institutional role as corporate safety valve and social corrective, tolerated by public officials. It became autonomous, a violent menace to individual and public good expressing the discordant urges and fears of a pluralistic society. Indeed, it tested the premises of democratic government.

Paul Gilje relates the practices of New York mobs to their American and European roots and uses both historical and anthropological methods to show how those mobs adapted to local conditions. He questions many of the traditional assumptions about the nature of the mob and scrutinizes explanations of its transformation: among them, the loss of a single-interest society, industrialization and changes in the workforce, increased immigration, and the rise of sub-classes in American society. Gilje's findings can be extended to other cities.

The lucid narrative incorporates meticulous and exhaustive archival research that unearths hundreds of New York City disturbances -- about the Revolution, bawdy-houses, theaters, dogs and hogs, politics, elections, ethnic conflict, labor actions, religion. Illustrations recreate the turbulent atmosphere of the city; maps, graphs, and tables define the spacial and statistical dimensions of its ferment. The book is a major contribution to our understanding of social change in the early Republic as well as to the history of early New York, urban studies, and rioting.

"A very fine book. . . . Gilje will establish himself as the leading student of urban popular unrest and violence in early national America."--Sean Wilentz

"This is a highly original contribution to a field of research that a generation of American scholars has made generally its own: the study of the popular movement that precedes, accompanies, or follows in the wake of the American Revolution. It is a worthy successor to the pioneering work of Alfred Young, Gary Nash, Dirk Hoerder, Pauline Maier, Edward Countryman."--George Rudé