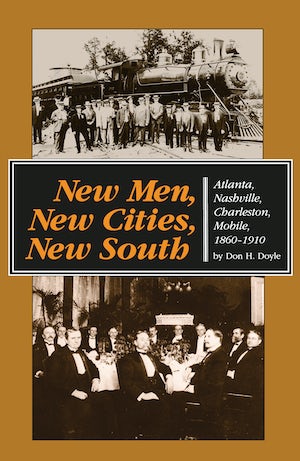 Cities were the core of a changing economy and culture that penetrated the rural hinterland and remade the South in the decades following the Civil War. In New Men, New Cities, New South, Don Doyle argues that if the plantation was the world the slaveholders made, the urban centers of the New South formed the world made by merchants, manufacturers, and financiers. The book's title evokes the exuberant rhetoric of New South boosterism, which continually extolled the "new men" who dominated the city-building process, but Doyle also explores the key role of women in defining the urban upper class.

Doyle uses four cities as case studies to represent the diversity of the region and to illuminate the responses businessmen made to the challenges and opportunities of the postbellum South. Two interior railroad centers, Atlanta and Nashville, displayed the most vibrant commercial and industrial energy of the region, and both cities fostered a dynamic class of entrepreneurs. These business leaders' collective efforts to develop their cities and to establish formal associations that served their common interests forged them into a coherent and durable urban upper class by the late nineteenth century. The rising business class also helped establish a new pattern of race relations shaped by a commitment to economic progress through the development of the South's human resources, including the black labor force. But the "new men" of the cities then used legal segregation to control competition between the races.

Charleston and Mobile, old seaports that had served the antebellum plantation economy with great success, stagnated when their status as trade centers declined after the war. Although individual entrepreneurs thrived in both cities, their efforts at community enterprise were unsuccessful, and in many instances they remained outside the social elite. As a result, conservative ways became more firmly entrenched, including a system of race relations based on the antebellum combination of paternalism and neglect rather than segregation. Talent, energy, and investment capital tended to drain away to more vital cities.

In many respects, as Doyle shows, the business class of the New South failed in its quest for economic development and social reform. Nevertheless, its legacy of railroads, factories, urban growth, and changes in the character of race relations shaped the world most southerners live in today.

Don H. Doyle, McCausland Professor of History at the University of South Carolina, is author of Faulkner's County: The Historical Roots of Yoknapatawpha.

"A fine book filled with astute insights, shrewd judgments, and interesting vignettes. It is soundly researched, and the arguments are convincingly developed."--Labor History

"This is a well-written, extensively researched book that will be a significant contribution to our understanding of the postwar South. Both urban and Southern historians will welcome it."--David R. Goldfield, University of North Carolina at Charlotte

"Doyle has produced one of the best monographs to date on boosterism and the New South's urban business elites. [A] beautifully written book."--Alabama Review