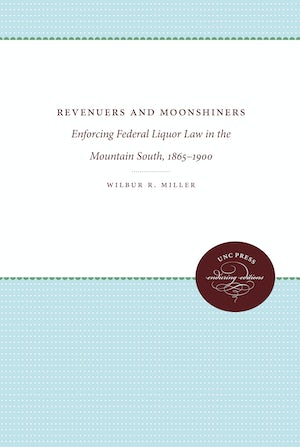 The federal government's attempt to enforce civil rights measures during Reconstruction is usually regarded as a failure. Far more successful, however, was the collection of federal excise taxes on liquor during the same period -- an effort that secured for the government its single most important source of internal revenue. In Revenuers and Moonshiners Wilbur Miller explores the development and professionalization of the federal bureaucracy by examining federal liquor law enforcement in the mountain South after the Civil War. He addresses the central questions of the conditions under which unpopular federal laws could be enforced and the ways in which enforcement remained limited.

The extension of federal taxing power to cover homemade whiskey was fiercely resisted by mountain people, who had long relied on distilling to produce an easily transported and readily salable product made from their corn. As a result, the collection of the tax required the creation of the most extensive civilian law enforcement agency in the nation's history, the Bureau of Internal Revenue. The bureau both regulated taxpaying distilleries and combated illicit production. This battle against moonshiners, Miller argues, implemented by the Republican party's vision of a federal authority capable of reaching into the most remote parts of the nation.

Miller concentrates his analysis on the revenuers, but he nevertheless draws a clear picture of the mountain people who resisted them. He dispels traditional views of moonshiners as folk heroes imbued with a stubborn individualism or simple country folk victimized by outside forces beyond their control or understanding. Rather, Miller shows that the men (and sometimes women) who made moonshine were members of a complex and changing society that was a product of both traditional aspects of mountain culture and the forces of industrialization that were reshaping their society after the Civil War.

Wilbur R. Miller is author of Cops and Bobbies: Police Authority in New York and London, 1830-1870.

"Casts new light on one of the most colorful chapters of American history and the revenuers and moonshiners who made it so."--New York Times Book Review

"Will stand as the foremost treatment of the subject, an engaging blend of historical analysis and vivid anecdotes of the exploits of both practitioners and enforcers."--West Virginia History