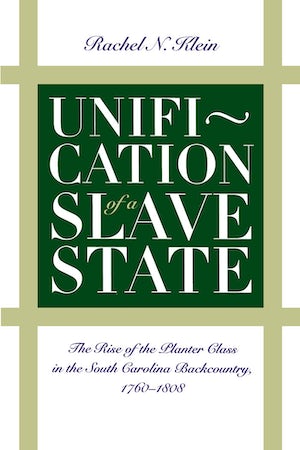 This book describes the turbulent transformation of South Carolina from a colony rent by sectional conflict into a state dominated by the South's most unified and politically powerful planter leadership. Rachel Klein unravels the sources of conflict and growing unity, showing how a deep commitment to slavery enabled leaders from both low- and backcountry to define the terms of political and ideological compromise.

The spread of cotton into the backcountry, often invoked as the reason for South Carolina's political unification, actually concluded a complex struggle for power and legitimacy. Beginning with the Regulator Uprising of the 1760s, Klein demonstrates how backcountry leaders both gained authority among yeoman constituents and assumed a powerful role within state government. By defining slavery as the natural extension of familial inequality, backcountry ministers strengthened the planter class. At the same time, evangelical religion, like the backcountry's dominant political language, expressed yet contained the persisting tensions between planters and yeomen.

Rachel N. Klein is associate professor of history at the University of California, San Diego.
For more information about Rachel N. Klein, visit the Author Page.

"To the extent that developments in South Carolina presaged what was to come in other southern states, Unification of a Slave State constitutes an important contribution to the historiography of the region in general as well as the state in particular. Klein's stimulating and sophisticated book is therefore a must-read for anyone interested in the history of the region."--Robert Weir, University of South Carolina

"In her important Unification of a Slave State, Rachel N. Klein expertly wields a historian's prime weapon: exploring when things happen. . . . She clarifies why the spread of cotton culture brought unity so seemingly instantly to South Carolina."--William Freehling, The Johns Hopkins University

"Klein offers a telling and readable account of the transformation of South Carolina that will intrigue scholars and lay readers alike."--South Carolina Historical Magazine

"[Klein] presents compelling accounts of a series of struggles that shaped the backcountry's social and political order."--Journal of American History