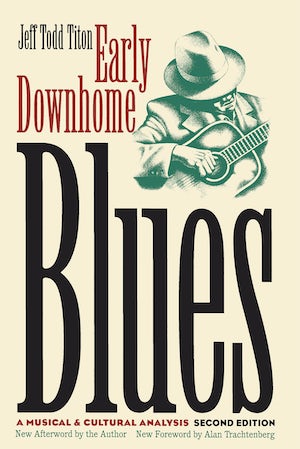 Hailed as a classic in music studies when it was first published in 1977, Early Downhome Blues is a detailed look at traditional country blues artists and their work.

Combining musical analysis and cultural history approaches, Titon examines the origins of downhome blues in African American society. He also explores what happened to the art form when the blues were commercially recorded and became part of the larger American culture. From forty-seven musical transcriptions, Titon derives a grammar of early downhome blues melody. His book is enriched with the recollections of blues performers, audience members, and those working in the recording industry.

In a new afterword, Titon reflects on the genesis of this book in the blues revival of the 1960s and the politics of tourism in the current revival under way.

Jeff Todd Titon is professor of music at Brown University and author of Downhome Blues Lyrics, Powerhouse for God, and Give Me This Mountain.
For more information about Jeff Todd Titon, visit the Author Page.

"Accessible to both student and fan . . . [this book] belongs in every blues library."--Living Blues

"A classic study of blues. Jeff Titon reveals the artistry of blues performers and their rich contributions to American music."--William Ferris, University of Mississippi