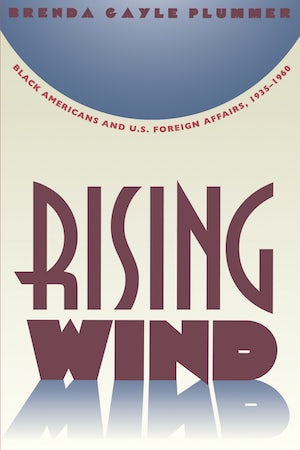 African Americans have a long history of active involvement and interest in international affairs, but their efforts have been largely ignored by scholars of American foreign policy. Gayle Plummer brings a new perspective to the study of twentieth-century American history with her analysis of black Americans' engagement with international issues, from the Italian invasion of Ethiopia in 1935 through the wave of African independence movements of the early 1960s.

Plummer first examines how collective definitions of ethnic identity, race, and racism have influenced African American views on foreign affairs. She then probes specific developments in the international arena that galvanized the black community, including the rise of fascism, World War II, the emergence of human rights as a factor in international law, the Cold War, and the American civil rights movement, which had important foreign policy implications. However, she demonstrates that not all African Americans held the same views on particular issues and that a variety of considerations helped shape foreign affairs agendas within the black community just as in American society at large.

“This book makes an impressive and much-needed contribution to scholarship not only on the fields of twentieth-century African-American and domestic U.S. history but also on the study of public influences on U.S. foreign policy and of transnational contacts among activists opposed to colonialism and racial discrimination. The quantity and quality of Brenda Gayle Plummer’s research and the sophistication and detail of her argument are especially impressive.”--American Historical Review

"Plummer's thoroughly researched and engaging book examines the neglected subject of the African American response to mid-20th-century US foreign policy and world events. . . . Plummer's conceptual view is first rate, especially on the Cold War period and the civil rights challenge to US foreign policy."--Choice

"This is an impressive book. It is extensively researched in a variety of sources, well written, provocative in its interpretations, and even with its justifiable flashes of anger over past injustices to blacks by the traditional American establishment, judiciously reasoned."--International History Review

"[A] brilliant and perceptive study."--Journal of American History

"A splendidly researched, beautifully written, and carefully argued exploration into the important connections between race and U.S. foreign policy. . . . Because of this original, imaginative, and generative work, we will never again be able to write about black history without understanding its international dimensions or write about U.S. foreign policy without realizing the crucial role [played by] race."--George Lipsitz, University of California, San Diego

"This work is so well-researched, so well-written and so powerful in bringing light on heretofore neglected aspects of African-American, U.S., and global history, a number of scholars are going to have to retool and reconceptualize the manner in which they approach history and life itself."--Gerald Horne, director, Black Cultural Center, University of North Carolina at Chapel Hill