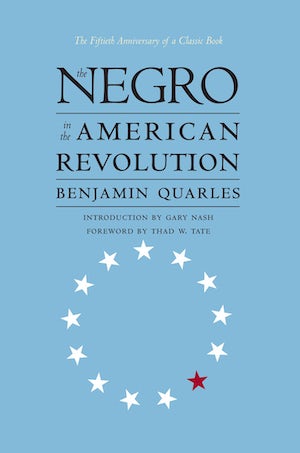 Originally published in 1961, this classic work remains the most comprehensive history of the many and important roles played by African Americans during the American Revolution. With this book, Benjamin Quarles added a new dimension to the military history of the Revolution and addressed for the first time the diplomatic repercussions created by the British evacuation of African Americans at the close of the war. The compelling narrative brings the Revolution to life by portraying those tumultuous years as experienced by Americans at all levels of society.

In an introduction, Gary B. Nash traces the evolution of scholarship on African Americans in the American Revolution from its early roots with William C. Nell to this groundbreaking study. Quarles's work not only reshaped our thinking about the black revolutionary experience but also invigorated the study of black history as we know it today.

Thad W. Tate, in a foreword, pays tribute to the importance of this work and explains its continuing relevance.

Benjamin Quarles was professor of history at Morgan State University in Baltimore. His many authored or edited books include The Negro in the Civil War and Narrative of the Life of Frederick Douglass.


For more information about Benjamin Quarles, visit the Author Page.

"One of the major virtues of Quarles's book is that it does not confine itself merely to [its] principal theme of Negroes as revolutionaries, but deals also with the Negroes who served with the British (mostly as laborers and a few as spies) and with those who were 'carried off' at the end of the war."--New England Quarterly

"Quarles sheds some light on a shadowy and esoteric corner of the history of the Revolution. . . . He has done impressive and thorough research."--American Historical Review