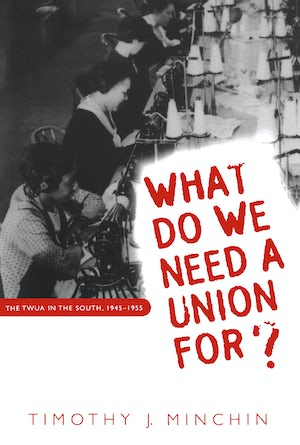 The rise in standards of living throughout the U. S. in the wake of World War II brought significant changes to the lives of southern textile workers. Mill workers' wages rose, their purchasing power grew, and their economic expectations increased--with little help from the unions. Timothy Minchin argues that the reasons behind the failure of textile unions in the postwar South lie not in stereotypical assumptions of mill workers' passivity or anti-union hostility but in these large-scale social changes. Minchin addresses the challenges faced by the TWUA--competition from nonunion mills that matched or exceeded union wages, charges of racism and radicalism within the union, and conflict between its northern and southern branches--and focuses especially on the devastating general strike of 1951. Drawing extensively on oral histories and archival records, he presents a close look at southern textile communities within the context of the larger history of southern labor, linking events in the textile industry to the broader social and economic impact of World War II on American society.

"Minchin's study of race in the paper industry shows in graphic detail that federal intervention was absolutely essential for addressing job discrimination. . . . Minchin makes a valuable contribution to discussions about state action and to arguments about the failures of interracial unionism. Most important, his vivid evidence proves that legal remedies would have been dead letter without black workers' grit and tenacity."--Labor History

"An insightful examination of racial divisions in the southern paper industry and of the efforts of African American workers to break down the walls of segregation and end discrimination in the paper mills. . . . [Minchin's] work adds significantly to our understanding of the black freedom struggles of the late twentieth century. . . . A valuable contribution to our understanding of the racial dynamics of the southern workplace."--Journal of Southern History

“A very impressive contribution to the literature in American labour history, but also to understanding the post-1940 South. . . . A model of style and organization with attention to debates in labour history and Southern history and deserves a wide readership.”--Labour History Review

“Honest scholarship that sets the record much straighter than it was before. It covers topics thoroughly and fairly, including gender and race.”--Journal of Economic History

“Well researched and written. . . . It should be included in the reading of all historians interested in contemporary American history as well as Southern history.”--Mississippi Quarterly

“A refreshing contribution.”--Journal of American History