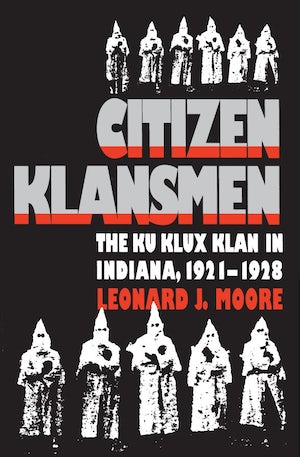 1992 Outstanding Book Award, Gustavus Myers Center for the Study of Bigotry and Human Rights in the United States

Indiana had the largest and most politically significant state organization in the massive national Ku Klux Klan movement of the 1920s. Using a unique set of Klan membership documents, quantitative analysis, and a variety of other sources, Leonard Moore provides the first comprehensive analysis of the social characteristics and activities of the Indiana Klan membership and thereby reveals the nature of the group's political support.

Challenging traditional assumptions about the Klan, Moore argues that in Indiana the organization represented an extraordinarily wide cross section of white Protestant society. More than 25 percent of native-born men in the state became official members. Indeed, the Klan was many times larger than any of the veterans' organizations that flourished in Indiana at the same time and was even larger than the Methodist church, the state's leading Protestant denomination.

The Klan's enormous popularity, says Moore, cannot be explained solely by the group's appeal to nativist sentiment and its antagonism toward ethnic minorities. Rather, the Klan gained wide-spread support in large part because of its response to popular discontent with changing community relations and values, problems of Prohibition enforcement, and growing social and political domination by elites. Moreover, Moore shows that the Klan was seen as an organization that could promote traditional comunity values through social, civic, and political activities.

It was, he argues, a movement primarily concerned not simply with persecuting ethnic minorities but with promoting the ability of average citizens to influence the workings of soiciety and government. Thus, Moore concludes, the Klan of the 1920s may not have been as much a backward-looking aberration as it was an important example of one of the powerful popular responses to social conditions in twentieth-century America.

"This accumulation of data, crisply and cogently presented, is the fullest, most impressive statement of the new Klan scholarship."--Michael Kazin, American Historical Review

"Clearly the most important piece of scholarship to date concerning the Indiana Klan."--Indiana Magazine of History

"For students of the Klan and historians interested in the social movements of the 1920s, this work is a valuable and indispensable resource."--Journal of American Ethnic History

"Simply put, Citizen Klansmen is the best published study of the second KKK to date. . . . The author has presented a powerful argument that will profoundly shape the debate about the significance of the Invisible Empire for years to come."--Reviews in American History

"A scrupulous blend of traditional and quantitative historical methods. It casts new light on the Ku Klux Klan of the 1920s and on the very nature of protest movements in twentieth-century American history."--Allan Lichtman, American University

"Leonard Moore's fine study of the Klan in its heartland carries our understanding of America's recurrent nativist movements one level deeper, below stereotypes. He invites us to actually think about the Klan again, and when the book is done, we are not where we were. Those interested in the 1920s will not want to miss it."--Otis L. Graham, Jr., University of California, Santa Barbara