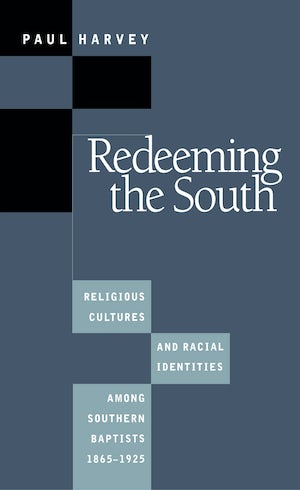 Together, and separately, black and white Baptists created different but intertwined cultures that profoundly shaped the South. Adopting a biracial and bicultural focus, Paul Harvey works to redefine southern religious history, and by extension southern culture, as the product of such interaction--the result of whites and blacks having drawn from and influenced each other even while remaining separate and distinct.

Harvey explores the parallels and divergences of black and white religious institutions as manifested through differences in worship styles, sacred music, and political agendas. He examines the relationship of broad social phenomena like progressivism and modernization to the development of southern religion, focusing on the clash between rural southern folk religious expression and models of spirituality drawn from northern Victorian standards.

In tracing the growth of Baptist churches from small outposts of radically democratic plain-folk religion in the mid-eighteenth century to conservative and culturally dominant institutions in the twentieth century, Harvey explores one of the most impressive evolutions of American religious and cultural history.

Paul Harvey is professor of history at the University of Colorado at Colorado Springs.
For more information about Paul Harvey, visit the Author Page.

“A well-researched study. . . . Harvey’s arguments rest exclusively on primary documents. . . . The book also reflects a meticulous reading of secondary literature in the field of race, gender, Southern religion, and the Baptist faith. . . . For those people doing research in most any aspect of religion in the post-bellum American South, this study covers important ground---and covers it well.”--Journal of Religious History

“In fine fashion, Paul Harvey describes the processes whereby the dominant white and African American religious bodies in the South redefined themselves cultural and institutionally in the crucial period between the end of the Civil War and the mid-1920s. . . . A good, provocative book.”---Journal of Southern History

“Redeeming the South is a rich book built on extensive primary and secondary research. Harvey successfully illuminates the commonalities and the mutual antagonisms in the experiences of white and black Baptists in the South.”--Church History

“This informative, impressively researched, and wide-ranging book is an important contribution to black, cultural, religious, social, and southern history.”--Journal of American History

"Thoroughly researched and clearly written, this excellent study traces the interaction of white and black southern Baptists from the Civil War to the mid-1920s."--Journal of Church and State

"Harvey mounts the most thorough and convincing challenge to the so-called 'cultural captivity' thesis to date. He also demonstrates that southern progressivism was not 'for whites only.'"--American Historical Review