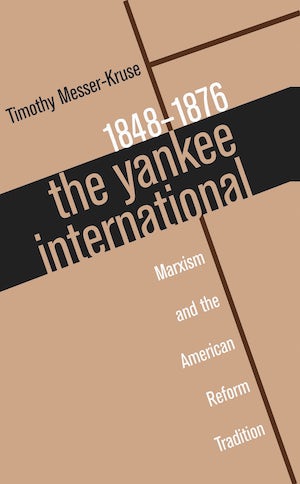 Examining the social and intellectual collision of the American

reform tradition with immigrant Marxism during the Reconstruction

era, Timothy Messer-Kruse charts the rise and fall of the

American reformers--many of them veterans of antebellum crusades for abolition, women's rights, and other radical causes--to the IWA, how their presence affected the course of the American Left, and why they were ultimately purged from the IWA by their orthodox Marxist comrades.

Messer-Kruse explores the ideology and activities of the

American reformers' thinking on the question of wage labor and

illuminating the beginnings of a broad labor reform coalition in

the early years of Reconstruction. He shows how American

reformers' priority of racial and sexual equality clashed with

Ultimately, he argues, Marxist demands for party discipline and

republicanism. With the expulsion of Yankee reformers from the

IWA in 1871, American Marxism was divorced from the American

"An important and timely contribution to the growing literature on nineteenth century American radicalism. . . . Messer-Kruse does a superb job recapturing the radicalism of the American activists about whom he writes. . . . Messer Kruse’s book is a welcome advance by the New Labor History onto a terrain long held without real challenge by other old-fashioned Marxist scholars."--Labour History Review

"An absorbing, well-researched study. . . . Should bring renewed attention to a crucial moment in the history of the American Left and inspire fresh thinking about the sources and potential for social change in our own time."--New England Quarterly

"Messer-Kruse's work is an entertaining examination of the events, circumstances, and personalities that led to the formation, organization, and disintegration of the American branch of Karl Marx’s International Workingmen’s Association."--Choice

"This fresh and provocative study of the First International's suppressed American branch shows that the idealism of antebellum reformers remained vital to the Gilded Age labor movement. Messer-Kruse's reappraisal of 'Yankee socialism' not only scores points against Marxist orthodoxy; it may well lead scholars to reconfigure the history of the American Left."--Carl J. Guarneri, author of The Utopian Alternative