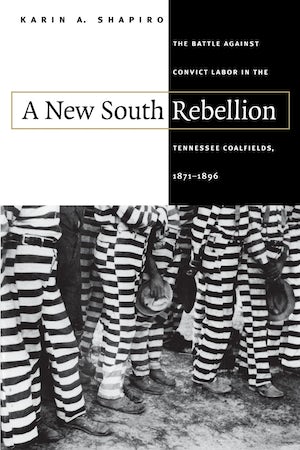 To purchase online via an independent bookstore, visit Bookshop.org
In 1891, thousands of Tennessee miners rose up against the use of convict labor by the state's coal companies, eventually engulfing five mountain communities in a rebellion against government authority. Propelled by the insurgent sensibilities of Populism and Gilded Age unionism, the miners initially sought to abolish the convict lease system through legal challenges and legislative lobbying. When nonviolent tactics failed to achieve reform, the predominantly white miners repeatedly seized control of the stockades and expelled the mostly black convicts from the mining districts. Insurrection hastened the demise of convict leasing in Tennessee, though at the cost of greatly weakening organized labor in the state's coal regions.

Exhaustively researched and vividly written, A New South Rebellion brings to life the hopes that rural southerners invested in industrialization and the political tensions that could result when their aspirations were not met. Karin Shapiro skillfully analyzes the place of convict labor in southern economic development, the contested meanings of citizenship in late-nineteenth-century America, the weaknesses of Populist-era reform politics, and the fluidity of race relations during the early years of Jim Crow.

Karin A. Shapiro received her doctorate from Yale University and served from 1992 to 1997 as a research fellow at Johannesburg's University of the Witwatersrand. She now lives in Durham, North Carolina.
For more information about Karin A. Shapiro, visit the Author Page.

"Shapiro's careful analyses, clear argument, and excellent writing elevate the convict wars to one of the South's major struggles between capital and labor."--Law and History Review

"Shapiro has produced the book-length version that this dramatic episode has long needed. It not only supersedes previous accounts--it overwhelms. Shapiro’s exhaustive research in scores of newspapers, manuscript collections, government documents, company reports, court cases, and all the pertinent secondary literature results in vivid portrayals of the miners, their communities, the businessmen they confronted, and the hapless state government--all analyzed with care, coolness, and discriminating judgment."--Journal of Southern History

"Simply by bringing this fascinating chronicle fully to light, Shapiro adds significantly to the literature in the field, but her contribution extends much further, ultimately helping us to understand much about the character of industrial and community relations in the small coal towns of the postbellum South."--Reviews in American History

"Shapiro’s book eschews facile romantic views of southern labor as a brotherhood of class-conscious workers striving to overthrow the system. Instead, she gives us an analysis of the forces---social, economic, and political---that shaped labor militancy, and consequently she has created a much more balanced, complex, and compelling portrait of labor in the New South."--American Historical Review

"A sophisticated and multilayered analysis. . . . Shapiro aptly draws on the tension between old and new to highlight multiple themes including region, colonialism, urbanization, class consciousness, agency, and militancy."--Labour

"Insightful. . . . An engaging story about the interaction of the state government, miners, and mine managers in late-nineteenth-century Tennessee. . . The book will stand as a valuable contribution to the history of labor union activity in the South."--Journal of Economic History