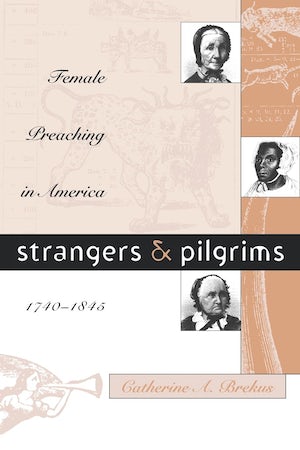 Margaret Meuse Clay, who barely escaped a public whipping in the 1760s for preaching without a license; "Old Elizabeth," an ex-slave who courageously traveled to the South to preach against slavery in the early nineteenth century; Harriet Livermore, who spoke in front of Congress four times between 1827 and 1844--these are just a few of the extraordinary women profiled in this, the first comprehensive history of female preaching in early America.

Drawing on a wide range of sources, Catherine Brekus examines the lives of more than a hundred female preachers--both white and African American--who crisscrossed the country between 1740 and 1845. Outspoken, visionary, and sometimes contentious, these women stepped into the pulpit long before twentieth-century battles over female ordination began. They were charismatic, popular preachers, who spoke to hundreds and even thousands of people at camp and revival meetings, and yet with but a few notable exceptions--such as Sojourner Truth--these women have essentially vanished from our history. Recovering their stories, Brekus shows, forces us to rethink many of our common assumptions about eighteenth- and nineteenth-century American culture.

"A masterful overview that highlights recent advances in the study of religious women and indicts both women's historians and religious historians for failing to notice."--Christianity Today

"An important addition to our understanding of women and Christian traditions in the United States. . . . The volume adds such profundity and detail to the particulars of early preaching women's lives that it is a major contribution."--Journal of Religion

"Excellent. . . . [This book] is the first to explore a forgotten world of female evangelists, both white and black, who tried to forge a tradition of female religious leadership in early America. . . . A study which should quickly become the standard work on its subject, radically altering our understanding of America's religious past and adding new dimensions to our view of women's lives."--Journal of American Studies

"A long-awaited study that does not disappoint . . . Brekus offers a stunning example of ‘recovering voices’. . . . Strangers and Pilgrims is necessary reading for students of American religion and any women preachers today who are interested in the rich tradition of which they, perhaps unknowingly, are a part."--Journal of Ecclesiastical History

"A valuable accomplishment. Catherine Brekus has put women preachers on the religious map of early America. A reader imagines them climbing the steps to indoor pulpits or open-air platforms, to the joy of some spectators and the disgust of others. It is a compelling picture that deserves to hold the attention of scholars and general readers alike."--Journal of the Early Republic

"Brekus shows that female preachers not only participated in the evangelical fervor, but also that as women left an unforgettable mark on American religion. . . . Brekus succeeds in answering a major omission in the previous scholarship. . . . These women deserve to have their stories told again. Brekus makes their struggles compelling, and so her book is a valuable contribution to the field of American religious history."--William and Mary Quarterly