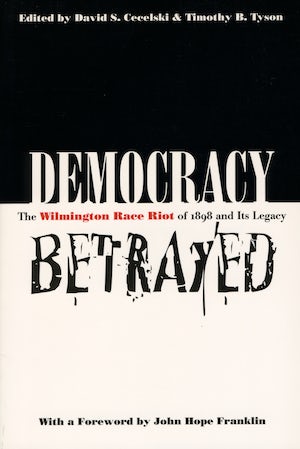 At the close of the nineteenth century, the Democratic Party in North Carolina engineered a white supremacy revolution. Frustrated by decades of African American self-assertion and threatened by an interracial coalition advocating democratic reforms, white conservatives used violence, demagoguery, and fraud to seize political power and disenfranchise black citizens. The most notorious episode of the campaign was the Wilmington "race riot" of 1898, which claimed the lives of many black residents and rolled back decades of progress for African Americans in the state.

Published on the centennial of the Wilmington race riot, Democracy Betrayed draws together the best new scholarship on the events of 1898 and their aftermath. Contributors to this important book hope to draw public attention to the tragedy, to honor its victims, and to bring a clear and timely historical voice to the debate over its legacy.

Timothy B. Tyson is senior scholar at the Center for Documentary Studies at Duke University and adjunct professor of American studies at the University of North Carolina at Chapel Hill. He is author of Blood Done Sign My Name: A True Story and Radio Free Dixie: Robert F. Williams and the Roots of Black Power.
For more information about Timothy B. Tyson, visit the Author Page.

"[This book's] influence need not be limited to Wilmington. Because it shows national trends and social processes with local concreteness, Democracy Betrayed will be useful in courses on southern history or U.S. race relations."--Southern Cultures

"Anyone hoping to advance the process of racial healing in the United States could do worse than to read these essays and pass on the stories and lessons contained within them."--American Historical Review

"Cecelski and Tyson have assembled a superb set of papers. While the explicit purpose of this volume is to commemorate the centennial of the 1898 Wilmington race riot, it goes further, much further. The essays offer us a rich understanding of the complex historical interplay of race, gender, and social class--how these factors interweave to form a context promoting and justifying the 1890s wave of racial violence directed at African Americans in the South in general and in Wilmington in particular. I recommend this book not only to those interested in Wilmington and North Carolina history but also to all those interested in southern history and race relations."--Journal of Southern History

"An extraordinarily rich and thoughtful collection of essays."--Journal of American History

"The overall quality of this volume, along with the skill and consistency with which it is edited, is unusually high. The range of essays encompasses the latest and best thinking about race and public life in North Carolina, and interest in this book should be broad. Democracy Betrayed makes a major contribution to the literature about the history of race in North Carolina, adding considerably to what we know about the origins, impact, and aftermath of a watershed event in American History."--North Carolina Historical Review

"Writers often transcend themselves when they are willing to confront something ugly in their own society. These writers focus on the overthrow of the last interracial government in the post-Civil War South and the massacre two days later that confirmed as final the national settlement between conservative Northern Republicans and reactionary Southern Democrats. This is scholarship that matters."--William Evans, author of Ballots and Fence Rails: Reconstruction on the Lower Cape Fear