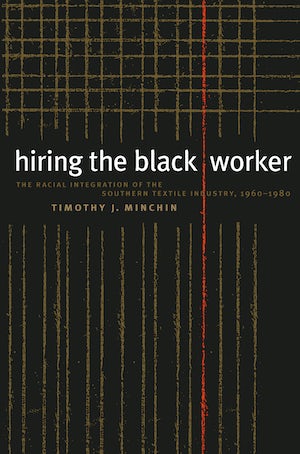 In the 1960s and 1970s, the textile industry's workforce underwent a dramatic transformation, as African Americans entered the South's largest industry in growing numbers. Only 3.3 percent of textile workers were black in 1960; by 1978, this number had risen to 25 percent. Using previously untapped legal records and oral history interviews, Timothy Minchin crafts a compelling account of the integration of the mills.

Minchin argues that the role of a labor shortage in spurring black hiring has been overemphasized, pointing instead to the federal government's influence in pressing the textile industry to integrate. He also highlights the critical part played by African American activists. Encouraged by passage of the 1964 Civil Rights Act, black workers filed antidiscrimination lawsuits against nearly all of the major textile companies. Still, Minchin notes, even after the integration of the mills, African American workers encountered considerable resistance: black women faced continued hiring discrimination, while black men found themselves shunted into low-paying jobs with little hope of promotion.

Timothy J. Minchin is author of What Do We Need a Union For?: The TWUA in the South, 1945-1955. He teaches American history at St. Andrews University in Scotland.
For more information about Timothy J. Minchin, visit the Author Page.

"This is a tremendously important book. It is the first full-length historical treatment of the racial integration of one of the American South's major industries, textiles. . . . An impressive piece of craftsmanship that complements Minchin's earlier study of the failure of trade unionism in southern textiles and establishes him as one of the leading scholars in this fertile field."--Ethnic & Racial Studies

"As the first in-depth study of the racial integration of the textile industry, Minchin's book is a genuine contribution to labor, civil rights, and political history that will generate further scholarship on the questions he probes."--Journal of American History

"A penetrating, widely researched study of the struggle for integration of the southern textile industry in the wake of the mid-60s enactment of civil rights legislation. . . . A first-rate work of labor history."--Choice

"Hiring the Black Worker breaks new ground in the history of the Civil Rights movement in the American South, as Tim Minchin tells the story of the desegregation of the white citadel that was the South's leading industry from the early twentieth century to the 1980s, a workplace and world that was one of the most racially segregated realms in the region. Minchin presents a careful, well-researched, clear, and subtle study of the breaching of the all-white world of southern textiles. He has also added to the growing list of recently published studies on the history of labor in the South."--Thomas Terrill, University of South Carolina