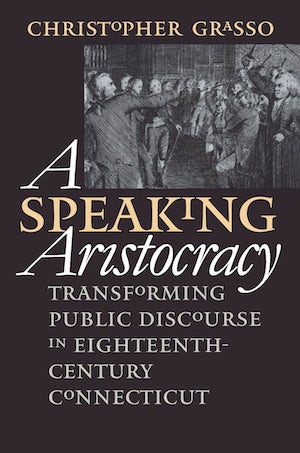 2000 Homer Babbidge Prize, Association for the Study of Connecticut History

As cultural authority was reconstituted in the Revolutionary era, knowledge reconceived in the age of Enlightenment, and the means of communication radically altered by the proliferation of print, speakers and writers in eighteenth-century America began to describe themselves and their world in new ways. Drawing on hundreds of sermons, essays, speeches, letters, journals, plays, poems, and newspaper articles, Christopher Grasso explores how intellectuals, preachers, and polemicists transformed both the forms and the substance of public discussion in eighteenth-century Connecticut.

In New England through the first half of the century, only learned clergymen regularly addressed the public. After midcentury, however, newspapers, essays, and eventually lay orations introduced new rhetorical strategies to persuade or instruct an audience. With the rise of a print culture in the early Republic, the intellectual elite had to compete with other voices and address multiple audiences. By the end of the century, concludes Grasso, public discourse came to be understood not as the words of an authoritative few to the people but rather as a civic conversation of the people.

"[An] outstanding new book. . . . A wide variety of scholars will be fascinated by this book. Even though there have been many fine studies of eighteenth-century intellectual history, few are as sophisticated, as subtle, and as learned as A Speaking Aristocracy."--Journal of American History

"Grasso traces not simply the transformation of the modes of discourse, and of the membership of the speaking elite, but also throughout this fine study analyzes the words and ideas of their eighteenth-century world."--Connecticut History

"A significant contribution to our understanding of high culture in one place and time. . . . Engaging."--Journal of the Early Republic

"Although Dickinson is mentioned briefly in only four separate instances, Grasso's well researched and organized study advocating anger as a 'mode of inquiry' may stimulate scholars to revisit Dickinson's poems and letters."--Emily Dickinson International Society Bulletin

"Grasso has written an important book. Historians of public life throughout the early modern Atlantic world will want to explore his account of how the learned men of eighteenth-century Connecticut--the speaking aristocracy--reshaped their discursive practices in an age of revolution."--American Historical Review

"Grasso’s book, among its many strengths . . . convinces us that how people think about themselves is supremely worthy of the historian’s study. It becomes essential reading for all serious students of American civilization."--William & Mary Quarterly